Posted on September 18, 2019 by Sam Sewell-Peterson 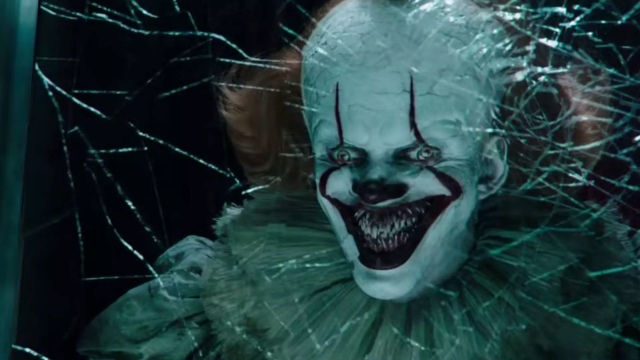 Two years have just flown by haven’t they? The first IT floated high above all expectations and had pretty much everyone clamoring for more. CHAPTER TWO is good…but only just. Stephen King’s novel isn’t an easy one to adapt and part two of the Losers’ story is about as good as the same stretch in the book.

27 years after banishing shapeshifting fear-parasite Pennywise (Bill Skarsgård) the grown up Losers, who have mostly moved away from Derry and moved on with their lives reconvene back home to destroy It once and for all.

Every adult Loser has no trouble at all convincing you they are the same children all grown up. I was convinced they must’ve shot the new scenes with the young Losers concurrently with the first film but they didn’t – incredibly they used de-aging effects on their teenage cast, which has to be a first. Despite some big names (James McAvoy, Jessica Chastain) the performance highlights are easily Eddie (James Ransone) and Richie (Bill Hader), much like last time with Jack Dylan Grazer and Finn Wolfhard, come to think of it. They do an interesting tweak to one character’s driving force as well, which, while not explicitly in the book, makes complete sense and adds a certain level of unexpected poignancy later on.

If there’s one thing I didn’t expect in this it’s a meta commentary on Stephen King as a writer. McAvoy’s Bill Denbrough is King’s self-insert character (they’re always writers with unfeasibly attractive wives or girlfriends) and he’s really successful despite the fact that everyone “didn’t like the ending” of pretty much everything he’s ever written.

The Chinese restaurant meeting and the scene with Mrs Kersh, the two most memorable scenes from the adults’ story in the book, are perfect, chilling and straight off the page. The discomfort and the creeping dread of the Mrs Kersh scene is especially effective and you’ve got to hand it to Joan Gregson’s skill at portraying that something’s more than a bit off with this seemingly kindly old lady with the subtlest of facial expression shifts and freezes. For me it was the scariest scene in the book and it’s one of the only genuinely frightening scenes in the film.

You always have to ask one thing of a horror film: is it scary? Frustratingly the answer here is no, not really. It’s handsomely moulded and fairly atmospheric, but the imagery won’t stay with you. Fear is tied so much better to character on a thematic level in the first film. Here it’s shallow, and aside from the natural fear of mortality, the Losers still seem affected by exactly the same generic spook-house stuff that frightened them as children. Pennywise really should have been morphing into mortgage statements and credit card bills.

Considering the runtime, surely there was room for more “rotten in Derry” scenes. A key part of It’s power is how he’s corrupted the whole town to its core over the centuries, how numbers of freak accidents, child disappearances and gruesome deaths have sky-rocketed. Aside from the ghastly homophobic attack at the beginning and some odd trance-like stares from the locals the film story’s primary location is missing this texture, this subtext.

This film could have been so much weirder. I wanted psychedelic sci-fi. I wanted trippy nightmare fuel. I wanted space turtles!

It: Chapter Two is solid. It just about makes up for a relative lack of scares with good performances throughout the cast and some entertainingly executed set pieces. All the money is up on screen and director Andy Muscietti still clearly loves this material, but with all the flashing back to events we saw last time you have to question whether it was worth splitting the film at all, whether one part of this story becomes redundant. SSP

I'm not paid to write about film - I do it because I love it. Favourite filmmakers include Bong Joon-ho, Danny Boyle, the Coen Brothers, Nicolas Winding Refn, Clio Barnard, Steven Spielberg, Guillermo del Toro, Paul Verhoeven, Taika Waititi and Edgar Wright. All reviews and articles are original works written and owned by me. They represent one man's opinion, and I'm more than happy to engage in civilised debate if you disagree.
View all posts by Sam Sewell-Peterson →
This entry was posted in Film, Film Review and tagged Andy Muscietti, Bill Hader, Bill Skarsgård, Finn Wolfhard, Horror, It, It: Chapter Two, Jack Dylan Grazer, James McAvoy, James Ransone, Jessica Chastain, Joan Gregson, Stephen King. Bookmark the permalink.