Posted on September 13, 2019 by Sam Sewell-Peterson 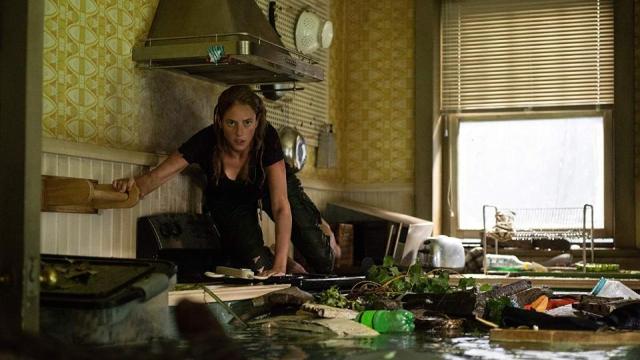 You skip cleaning the kitchen one week and look what happens!: Paramount/Raimi Productions

This was pretty gnarly, as the kids used to say (probably). We’ve seen so many varied creature features from the paranoid 1950s to the invention of the blockbuster in the 1970s and the low-fi efforts of the 2000s. CRAWL is of a piece with a lot of these but seems to get a lot more of the basics right that so many bafflingly get wrong.

Championship swimmer Haley (Kaya Scodelario) braves a ferocious hurricane to rescue her dad (Barry Pepper) who has become trapped in the crawlspace under his house as it floods and fills with alligators.

It really doesn’t matter what shape of animal is chasing you in movies like this, the pertinent question is do you care if it catches our protagonists? A good old-fashioned strained father-daughter relationship works well enough, giving Haley and her dad ample time between saving their limbs to talk through their myriad issues works wonders.

Haley and her dad really are put through it, battered, beaten and bitten by the natural world until one of them is more tourniquet than person. Objectives and consequences of each stage of the escape are clearly set out, action set pieces are well-paced, punctuated with jumps and a fair few surprises that blindside you and the alligators themselves which look like a combination of CGI and puppets/animatronics mostly convince. I say mostly because there’s always that split-second transition between something practical and something computer animated that really jars.

The film is a tight 85 minutes and not a moment is wasted. Yes, extra characters are introduced later on purely to give the scaly hunters more to chew on (oh I wonder what might happen to the occupants of an overladen, rickety boat or that guy leaning over a dark cellar hatch?) but our two leads only have so many limbs they can lose. Also having a very cute dog on hand for you to hope for survival is a cheap trick to keep audiences engaged but you expect that with this sort of territory.

Creature features are completely reliant on the animal antagonists being far more aggressive and relentless than they would be in reality. What alligator wouldn’t give up after being stabbed in the eye? You also just have to check your brain and go with the rules of this world – don’t question blood loss rates or the fact that an alligator could out swim any human no matter how long they’ve spent in the pool. Yes, even if we’ve had an opening scene establishing just how much Haley has to prove, it doesn’t turn her into a mermaid at a convenient time.

Crawl doesn’t really break any new ground but it’s very good at what it does, and what it does is serve up a jumbo helping of tense thrills without outstaying its welcome. Pop it on next time you have friends around for beer and snacks, enjoy the laughs and gasps and watch food, beverages and furniture fly at the jumpy bits. SSP

I'm not paid to write about film - I do it because I love it. Favourites include Bong Joon-ho, Danny Boyle, the Coen Brothers, Nicolas Winding Refn, Steven Spielberg, Guillermo del Toro, Taika Waititi and Edgar Wright. All reviews and articles are original works owned by me. They represent one man's opinion, and I'm more than happy to engage in civilised debate if you disagree.
View all posts by Sam Sewell-Peterson →
This entry was posted in Film, Film Review and tagged Barry Pepper, Crawl, Creature Feature, Horror, Kaya Scodelario. Bookmark the permalink.