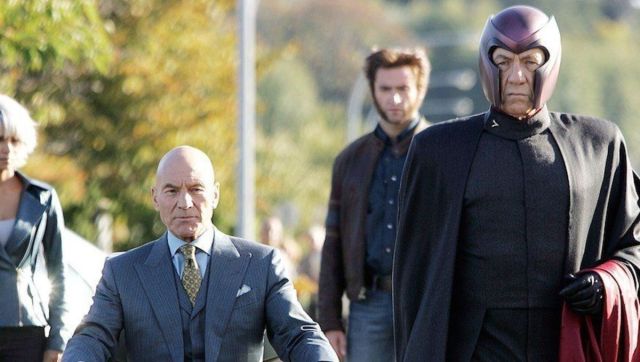 Remember how for the opening flashback of X-MEN: THE LAST STAND they smoothed out Patrick Stewart’s face to an alarming degree to make him look 25 years younger but just gave Ian McKellen some hair dye and a hat? Maybe because Stewart has looked the same since at least the early 80s they had to make Professor X’s past appearance look more drastic, but it was terrifying nonetheless. Things didn’t get much less distressing in the 100 minutes that followed…

The war between humanity and mutantkind is brought to a head by the invention of a cure for mutation, prompting terror attacks from the radical mutant leader Magneto (Ian McKellen) and his followers. Only the heroic mutant X-Men can prevent catastrophe by defending humanity, meanwhile apparently deceased teammate Jean Grey (Famke Janssen) returns and is far from herself…

So a boy crying in a bathroom with blood and feathers on the floor somehow equals mutant to his dad? It looks more like the kid has been covertly slaughtering chickens. Speaking of which there is precisely zero point to Angel (Ben Foster, whose every subsequent performance was better) being in this.

Fanservice alert: teasing the Sentinels in the Danger Room, Wolverine (Hugh Jackman) and Colossus (Daniel Cudmore) doing the “fastball special”, Iceman (Shawn Ashmore) finally fully icing up. I see you movie, and I’m not impressed. Also, introducing mutant power classes is fanboy nonsense that cheapens every character involved. Speaking of cheapening, “You reading my thoughts?” She doesn’t have to, Logan – you and the pervy camera clearly just ogled her cleavage.

Even with all the first-draft, explaining away all ambiguity and nuance dialogue (“What was that?” / “Danger Room session”, “They’re ready” / “But are you?”) Hugh Jackman is somehow still good. Kelsey Grammar is still good even in blue. Ian McKellan does his best with the worst and most simplistic rendering of Magneto in the entire series.

Having Grammar’s Beast in a diplomatic capacity as a mutant in the human President’s cabinet is a really nice idea, pays off the resolution of X2 and then…goes nowhere. Thst should have been the basis for a good chunk of the movie – I wanted Beast added to THE WEST WING!

The Bobby/Kitty (Ellen Page) ice skating scene is nice and all, but it undermines him as a character who always been decent before (where’s Rogue’s shoulder to cry on?) and further dumps on Rogue (Anna Paquin) by having her not confront him and just walk out of the movie. Rogue should fight; it’s in her nature. This mutant desire for normality played a lot better with young Beast in FIRST CLASS, whose mutation was more noticeable.

Forcing a cure on an unwilling population who isn’t sick is the natural end-point to the overarching allegory of Bryan Singer’s X-films, so I can see why they went for it. “The Cure” should have been the while movie and “Dark Phoenix” should have been the basis of at least two more films.

Belligerent, high-and-mighty Professor X is an uncomfortable fit. “The greater good” is more a Magneto thing, and because they turned Professor X into Magneto, they had to turn Magneto into something far less interesting. He’s basically Emperor Palpatine in this, and I couldn’t think of anything else but the Anakin/Palpatine/Windu scene in REVENGE OF THE SITH during the Jean/Professor X/Magneto confrontation.

“In chess the pawns go first” is the worst line Magneto could have uttered if you want him to stay true to his character. Aside from cheapening the playful scenes of gamesmanship and ideological and philosophical debate he had with Xavier in the first two movies, it’s just not him. His methods may be uncompromising, but he should shed a tear for every mutant life lost in his campaign for freedom.

There’s a wonderful simplicity to the gag of a mother locking her family car door as Magneto and his brotherhood of pissed-off mutants march by. We’re starving for good jokes this token effort may get us through! Almost as funny is seeing that some bright spark organised for Magneto’s closest ally to be transported in a small convoy of metal vehicles.

The final battle is an underwhelming close to a superhero trilogy. I suppose it’s to be expected as Magneto didn’t really assemble an army, he assembled the audience to the warmup act of a small music festival. Our grand finale is a jumble of indistinct characters, boring fight choreography and terrible wirework. But you already know this; The Last Stand is still a massive letdown thirteen years later. Join me next time to see just how Simon Kinberg screwed up his Dark Phoenix: Take 2. SSP