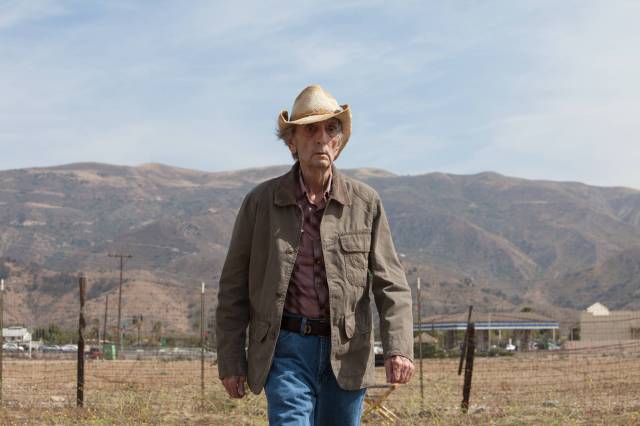 Some people really are just lucky. How was a man that had crossed the threshold into his 90s, that smoked and drank and liked cream and sugar in his coffee, still that sprightly? John Carroll Lynch’s film proclaims in the credits that “Harry Dean Stanton is LUCKY”. And Lucky is an unassuming poem on film.

Lucky (Harry Dean Stanton) walks here and there around his town, takes it all in and talks about life, whatever is left of his 90+ years. This is his understated and yet remarkable story.

It’s an unglamorous final role for Stanton, not that any of his many roles in his fruitful career were all that glamorous. What his performances mostly tended to be was endearing, and Lucky is no different. The opening scene sees him wake up, cigarette already in hand, wash his armpits, exercise and get dressed. Then a lot of the film that follows has us watch Lucky walking slowly and purposefully around his small desert town. And then he walks, sits, talks, walks again and repeats. Everything about this story is pleasingly everyday, even when things go a bit dreamy and Lucky seems to look towards his impending afterlife. After all, what is more human than looking towards our end?

What better way for a film to comment on mortality than for its star to be making, and know that he’s making, the final film of his life? John Carroll Lynch is a solid character actor, but here in his directorial debut he shows a good eye for grounded beauty and along with co-writer Logan Sparks clearly developed a sturdy enough relationship with his star to tease the best out of his life and result in the most nuanced near-real performance. Stanton may have looked like he would go on forever, but he must’ve sensed his end was near and indeed he ended up passing away two weeks before the film went on general release.

If Big Tobacco ever want a bit of positive press for a change they’d be hard pressed to get a better retort than Stanton’s to some unwanted health advice: “Those things are gonna kill you” / “If they could’ve they would’ve”. It may be unfair, but sometimes it’s just down to genes.

Like in real life, David Lynch (unexpectedly good here) plays Lucky’s best friend. He’s bemoaning the loss of his pet tortoise that’s run away. “I want to find him, he’s outlived two of my wives”. The tortoise is an important symbol for the film, apart from reflecting the philosophy of this group of characters leisurely moving through life, it could very well be Lucky’s spirit guide, slowly walking into the desert sunset like him. “He’s not missing. He’s not here, he’s there, wherever that is”.

You want wisdom, real wisdom? Try Lucky’s catchphrase, his remaining-life mantra on for size: “Realism is a thing” / “Truth is a thing”. There’s nothing pretentious about Lucky – he’s straightforward and he prefers the company of similar individuals who take things for what they actually are. He doesn’t even like complicated TV: “[DEAL OR NO DEAL is] a convoluted piece of sh*t!”.

I think I knew from the start that this one would stay with me. I like low-key. I like films that take their time and don’t feel they need to end up anywhere in particular. I like films that look at life, the universe and everything but don’t look like they’re doing it. I liked Harry Dean Stanton and his lifelong not-giving-a-sh*t. He acted as he lived, without airs and graces. He was real, he was true. He’s not here now, he’s there, wherever that is. SSP

I'm not paid to write about film - I do it because I love it. Favourite filmmakers include Bong Joon-ho, Danny Boyle, the Coen Brothers, Nicolas Winding Refn, Clio Barnard, Steven Spielberg, Guillermo del Toro, Paul Verhoeven, Taika Waititi and Edgar Wright. All reviews and articles are original works written and owned by me. They represent one man's opinion, and I'm more than happy to engage in civilised debate if you disagree.
View all posts by Sam Sewell-Peterson →
This entry was posted in Film, Film Review and tagged Comedy, David Lynch, Deal or No Deal, Drama, Harry Dean Stanton, John Carroll Lynch, Logan Sparks, Lucky. Bookmark the permalink.