Posted on December 10, 2018 by Sam Sewell-Peterson 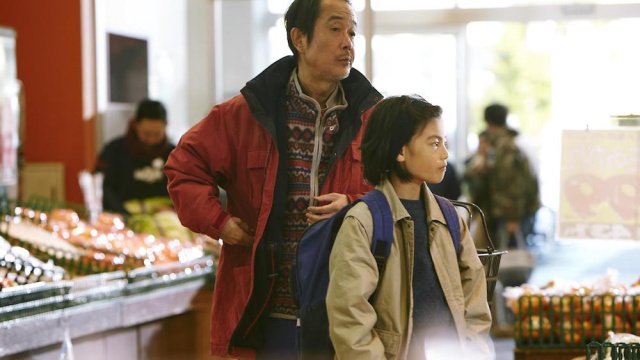 “In this life, one thing counts”… : AOI Promotion/Fuji Television Network

The list of Japanese films about petty crime and forgotten underclasses is short. The other that immediately springs to mind is TOKYO GODFATHERS and like Satoshi Kon’s Christmas animation, SHOPLIFTERS follows an unconventional family unit brought together on the streets by chance, and by love.

The shoplifting Shibata family take in another child when they find her abandoned on the streets. The girl is taught the family trade while the Shibatas face further financial difficulties and have doubts about their misbegotten way of life.

Japan has a relatively low crime rate and as a culture is particularly unforgiving of larceny. In addition to harsh sentencing for such crimes (not considered petty), being caught trying to steal someone else’s property is the antithesis of Japan’s culture of respect for each other. Writer-director Hirokazu Koreeda is taking his society’s strict morality to task. He isn’t making excuses for those who commit crime but merely asking us to acknowledge that the situation is rarely black-and-white. Who are we to judge someone’s desperate actions if we don’t know the full story?

Young Shota (Jyo Kairi making an amazing debut) gets the chance so few of us do – to choose his family. He was found on the streets and his real family are a distant memory, but he only has to stick with those who took him in, to remain a Shibata as long as he remains happy. He has other options. Because she is temporarily remembered by her abusive family (and the world is watching) Lin/Yuri (Miyu Sasaki) may not ever get that same chance. She is mistreated and deeply unhappy by the family she is born into but they will not let her go because of how poorly it would reflect on them.

“Don’t make her do it” says the kindly corner shop owner. Crime is never victimless, much as the Fagin-like patriarch Osamu (Lily Franky) would have his family believe. He does it because he can, because he always has done and because he gets a kick out of it.  Everyone else in the family does it as a last resort, supplementing meagre incomes from legitimate sources. As the scales fall from Shota’s eyes and his “dad” takes more risks for greater reward, he has a crisis of morality and realises that all some people care about is money. He loves his new family and they love him back, but he can no longer in good conscience go along with their lifestyle, especially when he sees the path the impressionable Lin is being drawn towards.

Surrogate mother Nobuyo (Sakura Andô) is the undoubted MVP of this ensemble. A good portion of the film’s final stretch is focussed just on Andô’s face as she has to justify not just her questionable actions, but herself, to the police. Osamu did what he did primarily out of greed with pity and love as an afterthought. Nobuyo really wanted to be a mother, to forge the family denied to her and to atone for her life’s mistakes and she ends up paying the price and taking the rap for her whole family. As harshly as the Japanese authorities deal with thieves, what really does the family in is a further transgression they commit that flouts the Japanese need for dignity and respect in all things.

Grandma (Kirin Kiki) is a more complex figure to analyse. She seems to have lived a whole other life with her late husband before they separated, he died and this new family gathered around her. She happily accepts money for looking after her late husband’s granddaughter Aki (Mayu Matsuoka) on behalf of her unloving parents and encourages the family’s criminal activities despite being able to live off her decent pension. She objects to new additions to the household and having more mouths to feed (fully expecting crime to supplement them before her own income) but comes to care for them all deeply, though she’d never come out and say it to their faces.

Shoplifters is a story about love. The Shibatas all love each other, eventually, and we come to love them all during the time we spend with them. It’s a film made in the small moments, in pure instances of bottled emotion. The family playing on a beach, huddling together listening for celebratory fireworks they can’t see, building a snowman because proud men don’t know how to say sorry. Every member of the family has their reasons for leading the life they do, some of them have a choice and some do not, but they are in it together until the day when circumstances force them apart. Shoplifters is humanist poetry on film. SSP