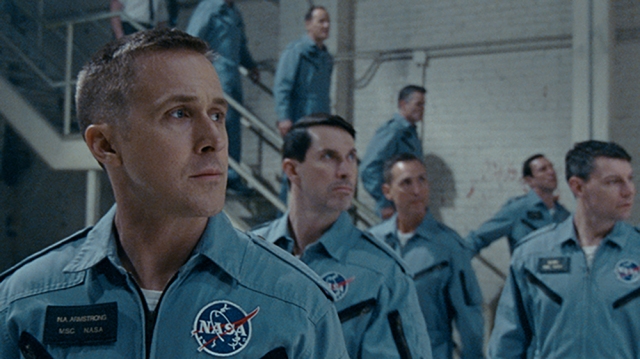 Enjoy this medium shot, you won’t be seeing many others: Universal Pictures/DreamWorks

We all know this story. If you were alive for the Moon Landing then you watched it, if you weren’t then you’ve still seen the footage. With FIRST MAN, Damien Chazelle explores the cost and the impact of getting the first man on the Moon on those most closely involved with the almighty effort.

Following a series of personal tragedies, test pilot Neil Armstrong (Ryan Gosling) is accepted onto NASA’s Project Gemini aiming to get American men into space and eventually on the surface of the Moon. For almost a decade, Armstrong and his fellow astronauts put their bodies through unimaginable pressures, their families through trauma and strain, and their very lives on the line.

Throughout First Man we watch Neil go through cycles of extreme focus and total emotional shutdown. When he has a clear task to achieve, nothing can deter him and he throws everything into doing the impossible. But when he loses somebody close or is forced to express emotions he is uncomfortable with (especially with others watching) he withdraws into himself completely. This of course effects his home life drastically and you really feel for how challenging life with him must have been for his wife Janet (Claire Foy) and sons. Gosling and Foy portray the Armstrongs’ loving but sometimes fraught marriage with captivating realism, never more so than when Janet has fly off the handle to stop Neil from doing something they will all regret.

It’s very thematically appropriate that when he finally walks on the moon, because of the necessary solar shielding on his helmet, the normally difficult to read Neil doesn’t have a face. Nobody does withdrawn, strong silent types quite like Gosling and all attention is on him here, every minuscule reaction in his unreadable visage.

This is one of the most effective uses of IMAX of all time. I won’t tell you the exact moment the change comes, but I think you may have an inkling. While the film makes the very best use of modern filmmaking technology in the set pieces, the film stock used and the pace of the earthbound scenes make it feel like classic film.

Much like THE RIGHT STUFF, the real terror comes from the constant cacophonous noise, not just the roar of fuel burning and air whistling past but more mundane, un-spacey and terrifying noises like rattling rivets and creaking metal. I was aware people died during the failed launches, but not the exact horrible circumstances. We know from films like HIDDEN FIGURES (which would be a good primer for this follow-up story) how much was riding on every calculation, and we really get a sense of what polymaths astronauts had to be; at their physical peak, calm under the pressure of imminent death and always able to not just think but think in three dimensional space, adjusting for acting forces or lack of in your given environment.

The can’t fail, they mustn’t fail or else all that waste of life would be just that. I’m not a space geek and I don’t foster that dream of one day getting into space as many do (on the contrary I find the idea of leaving Terra Firma and facing the infinite, even for a moment, absolutely terrifying). That said, I get the fascination, I get why it’s important to keep striving for advances in this area.

The only real issues I had with First Man were ones of connection, but this was likely intentional. For me the camera could have pulled back a few more times to take in a moment, given us a break from feeling like we’re invading the Armstrongs’ privacy.

The space flight scenes gave me pretty intense motion sickness, which probably means they worked well. What will stay with me was the personal touch, not quite letting you in to the Armstrongs’ lives but using them as stand-ins for so many families that were changed forever by the Space Race. SSP