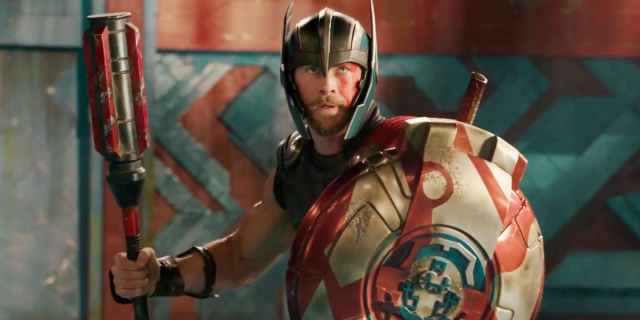 Show me your war face: Marvel/Disney

Some of you may remember THOR: THE DARK WORLD wasn’t that good. It wasn’t that bad either, but between storytelling falling over itself to cram in more of a certain God of Mischief after the fact and the worst villain in a Marvel film so far, it left a lot to be desired. THOR: RAGNAROK sends the trilogy out with a bang, and at the moment I’m struggling to remember the last time a film left me grinning ear-to-ear throughout. It was probably another Taika Waititi film.

Following the destruction of his all-powerful weapon Mjolnir by the vengeful goddess Hela (Cate Blanchett), Thor (Chris Hemsworth is dumped on a distant planet to fight for his life as a gladiator. Thor reconnects with the Incredible Hulk (Mark Ruffalo) during combat, and along with morally iffy brother Loki (Tom Hiddleston) and outcast warrior Valkyrie (Tessa Thompson), the God of Thunder must return to Asgard and prevent the end of their world, Ragnarok.

This is the most vibrant ensemble that doesn’t feature wisecracking raccoon. We already know Hemsworth and Hiddleston were born to play the sons of Odin, but the new additions of Jeff Goldblum’s campy despot, Tessa Thompson’s formidable Valkyrie and Waititi himself as a rock monster with incongruous New Zealand accent kept the smiles coming. Plenty of random cameos are sprinkled throughout as well, from inside the Marvel Cinematic Universe (Doctor Strange gets a scene) and out (nope, not going to spoil those).

Here we see Thor and Loki’s relationship actually grow, with the brothers coming to finally accept that they’re just different people. It’s a vibrant space romp, but everyone is given room to grow and their own moment to shine. Between this, IRON MAN and CAPTAIN AMERICA, Marvel now have unparalleled form in giving their trilogies satisfying denouements.

I love that even when dealing with gods and superheroes, Waititi isn’t averse to making pretty much everyone a bit crap at what they do. Thor still has ego issues (when he can’t work out the solution to a problem in the final act, this results in the best put-down of the film); Loki is still up to his old tricks despite most now being wise to his slipperiness; Valkyrie is a high-functioning alcoholic, the Grandmaster is an insecure tyrant and a glittery perv. The one-liners keep on coming, but so does the action, which is among the most eye-catching and creative in the Marvel series so far, lacking the bone-crunching wallop of fights in CIVIL WAR but more than making up for it with its own flow, style and fireworks.

Denis Villeneuve seems to have been all-but chosen as the next filmmaker to take a crack at DUNE, I don’t think Waititi would be a bad shout for the job either. He can clearly do over-the-top but doesn’t lose sight of what his ensemble is going through. In Ragnarok, he really leans into the pulpiness of the source material, everything being as big, bold and colourful as any Jack Kirby splash panel. Expect luridly coloured costumes and industrial spaceships decked out with war paint, imposing CG-extended sets and larger-than-life characters squabbling, scrapping and quite often just talking.

While some might criticise the gag-rate, the fact that we’re seldom allowed a moment to mull over anything, Ragnarok is still pretty bold in its iconoclastic aims. The shock destruction of Mjolnir is only the beginning, and the ultimate cost of Thor’s battle with Hela ends up pretty high. Blanchett might not have had to bring her A-game (as much fun as she looks like she’s having) but Hela’s presence and how she leaves things by the end is key. This is Marvel making another confident statement going forward: give them a couple more films and nothing will be the same. The big changes have already started, and after this thrilling mirthful ride, darkness and death looms on the horizon. At least it feels like they’ve earned it. SSP