Posted on October 1, 2017 by Sam Sewell-Peterson 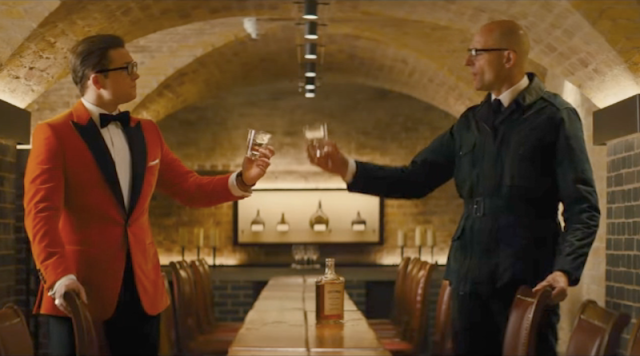 Here’s to going through the motions: Fox/Marv Films

The more I think about KINGSMAN: THE GOLDEN CIRCLE, the less I like it. When I first came out of the cinema, I thought it was OK, but I’m getting increasingly frustrated at mulling over a film with next to nothing to it. For all the dynamic action and bigger, shinier spy toys, Kingsman has lost the charm, the wit and the clear vision for what it wants to be that made the previous instalment such a joy.

When the entire support network for the Kingsman agents is destroyed, it is up to Eggsy (Taron Egerton) and Merlin (Mark Strong) to bring down the culprit, a drug-producing terrorist called Poppy (Julianne Moore). They must enlist the help of their better-funded American counterparts, the Statesman and also an old friend presumed dead…

The Kingsman story seem to have lost a beating heart somewhere along the way. The potential poignancy in the state in which Colin Firth’s Harry Hart returns (not a spoiler – it was in the first trailer) is completely squandered, digging further into his backstory made into a recurring joke. About the only moments which make any kind of emotional connection come from Mark Strong as a more fleshed-out and human spy drill sergeant Merlin, and he’s the only real acting highlight in the whole rotten affair.

A lot of people complained about a particular tasteless joke that ended the last film. Fear not, everyone, it’s now a recurring gag! The distasteful, puerile stuff is still prevalent throughout, particularly in an appalling sequence set at Glastonbury that makes AMERICAN PIE look the height of sophisticated comedy. Everyone involved is above skits about unwelcome advances while glamping and intimately-placed tracking devices. I never thought I’d think this this about a comedy movie, but thank goodness for Elton John: his willingness to act as a silly plot device is about the only really funny thing in this.

Once again I’m annoyed about Roxy (Sophie Cookson), who should have had an action scene last time (she was always better than Eggsy) but spent the whole third act tied to a balloon while the boys did the legwork. That would have been almost forgivable if they’d have used the sequel to correct these mistakes,  but again Roxy is given absolutely nothing to do.

The film isn’t about much of anything. The War on Drugs is a plot driver, but what are they saying about it, that narcotics peddlers want to profit without impediment and politicians want to be seen as taking a hard line on criminal activity? What a revelation. It’s just a series of vaguely linked events driven by thin motives and reactions to such. When director Matthew Vaughn and writer Jane Goldman run completely dry on ideas, they just repeat, retread and reestablish the status quo. Harry returning far from fighting fit is glossed over as soon as it’s convenient for him to be useful in the action scenes again (said action is dominated by not one but two re-hashes of the bar fight in the first film) Eggsy learns exactlythe same lessons as he did last time but with an added awkward scene with the in-laws. What little character development there is for the Statesman (Channing Tatum, Pedro Pascal and Halle Berry) all seems to happen between the scenes we actually get to see.

The new gadgets are at least entertainingly ridiculous – robot-armed henchmen, robot hench-dogs, an amphibious taxi and a machine gun-cum-shield in a suitcase – all very spy movie-tropey, but fun when they’re wheeled out for a scene all the same.

Kingsman: The Golden Circle is a big letdown. Other than the odd glimmer of inspiration and jolt of fun within the pumped-up action sequences, this is a bigger, emptier version of the same story. I’m hoping against hope that this is just a blip and Vaughn hits his stride again next time. SSP