Review: Alice Through the Looking Glass (2016)

Posted on December 8, 2016 by Sam Sewell-Peterson 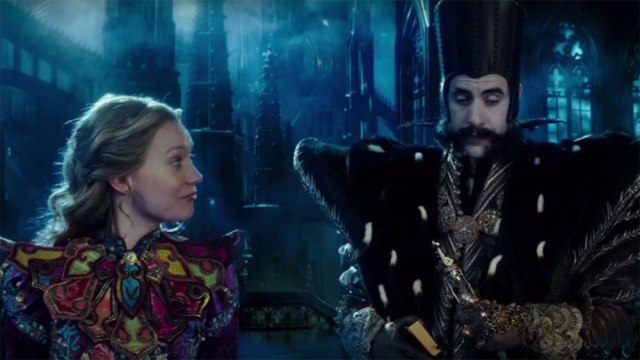 Six years ago it seemed like Tim Burton had found the perfect material to marry with his distinctive visuals and irreverent take on the world: Lewis Carroll’s Alice books. The resulting film, ALICE IN WONDERLAND, may have been colourful but it was also misjudged, overblown and not all that nonesensical. Half a decade on and a sequel directed by James Bobin has appeared. Who actually wanted this?

Alice Kingsleigh (Mia Wasikowska) is brought back from her globe-spanning trade mission to Victorian patriarchal society with a thump. As her influence and her freedom dwindles in our world, things are no rosier on the other side of the looking glass, where in Wonderland her friend the Hatter (Johnny Depp) is dying. Alice must pay a visit to the embodiment of Time (Sacha Baron Cohen) to find a way to save Hatter and change Wonderland at large for the better.

ALICE THROUGH THE LOOKING GLASS opens on an action scene that is flashy but brings with it deeply uncomfortable imperialist implications. There’s only one reason why an English trade ship with noble patronage would be running afoul of Chinese pursuers in this time period, and it sure as hell wasn’t for exceeding their luggage allowance.

In a case of sledgehammer symbolism, Alice goes from being a real-life sailor to a sailor on an ocean of time when the plot kicks in in earnest. Time has a nice quip about mortality and living in the moment that is at odds with the rest of the leaden script,”Everyone lets go of everything eventually”. At one point Time’s minions combine for added strength, as we see seconds become minutes and become hours. I liked the visualisation of all of Time’s realm, from his clockwork castle to his very Terry Pratchett’s Death take on observing the living and patiently awaiting their demise and the way the dead are consumed by clouds of rust.

Just as Through the Looking Glass becomes more about time rather than nonsense, it owes far more to HG Wells than Lewis Carroll. It’s a time travel adventure rather than a nonsensical romp. It works on a level of spectacle for what it is, but doesn’t deliver on some pretty basic levels. Alice spends most of the film trying to find out what is the matter with the Hatter, and to a lesser extent the Red Queen (Helena Bonham Carter), but both turn out to be very ordinary answers. Unfortunately, whereas THE TIME MACHINE explored the themes and story potential of the rapid passage of time to great dramatic effect, you really can’t understand why Alice is prepared to break time to save her friend, especially when every scene that is supposed to build character through exploring their shrouded past is painfully uninteresting. The Hatter has daddy issues and the Queen harbours a grudge; are either if these really revelations?

Johnny Depp has extenuated his speech impediment to make up for his lack of character. His makeup seems to have gotten worse since last time too. At least seeing the Hatter family photo with their orange wing hair gave me a laugh and he’s more a plot device than a big player in this one. Mia Wasikowska needs to move on and continue to pick braver and more challenging projects that stretch her. Sacha Baron Cohen has a lot of fun with a thick German accent and time puns, and the character design of Time as a clockwork cyborg with mutton chops is memorable and pleasingly offbeat.

It’s slightly better than the first one, but aside from inventive visuals and a token effort to make Alice an early champion of women’s rights, Through the Looking Glass is not really worth your time. Or as Cohen’s character would say, this movie is not worth your Me. SSP