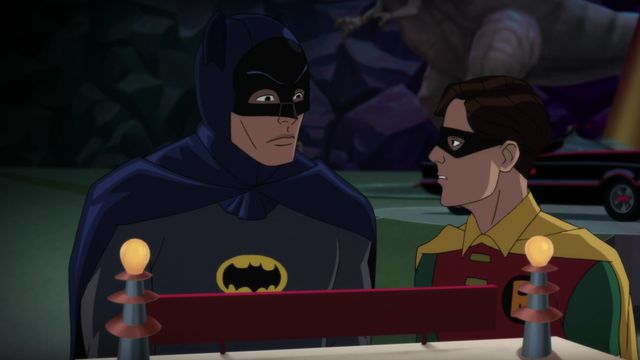 This may well be the cleverest and most subversive film Warner Bros Animation have ever made, and it’s an animated followup to 1960s BATMAN TV show. I’m an Adam West fan and an appreciator of “camp” as an aesthetic for entertainment, but even so I never thought I’d enjoy RETURN OF THE CAPED CRUSADERS quite as much as I did.

For anyone who’s been living in a cave for the last 70 years, billionaire Bruce Wayne (Adam West) and his young ward Dick (Burt Ward) lead double lives as masked crime fighters Batman and Robin. Once again our heroes set out to foil their most devious enemies. But Gotham City’s problems are only just beginning once Joker, Penguin, Riddler and Catwoman are subdued…

The first half of the film is a faithful recreation of the 60s TV show; campy, sporadically funny and often awkward. Ridiculous gadgets abound and flying leaps of logic still dumbfound everyone but our heroes. Batman boasts that the Bat-analyser has the information from “two encyclopaedias”, Robin responds to the Riddler’s pothole gun by exclaiming “Holy crumbling infrastructure, Batman!” and the Dynamic Duo have a narrow escape from a giant oven that is helpfully labelled “Giant Oven”. Then things really take a turn with a really rather ingenious plot conceit.

Holy spoilers, Batman! Just after confronting the supervillains in space (yep) Batman decides to take his brand of justice beyond “Pow!” and pulls out a Bat-knuckle-duster (“Fracture!”). Our previously noble hero then clones himself using a convenient bit of technology and takes over every position of power in Gotham to make it a better place. He starts by appointing Commissioner Batman and Chief Batman (for the latter he just puts on a hat over his ears and deadpans “begorrah”) and goes on from there.

Chastised as the soft and safe Batman, Adam West finally gets to play the Dark Knight, and has a load of fun doing it. This was a brave gamble, but by golly does it pay off. 60s Batman was a hero for wide-eyed school children; a non-threatening. incorruptible, moral idol. Making him temporarily flawed and (almost) allowing him to act out his darkest desires and leaving Robin to clear up his mess (Burt Ward is unusually good here as well) really shakes up the status quo, suggesting that for once everything might not be OK.

Such is the faithfulness of the transition of the tone and look of this world from live action to animation (disappointingly minus the Joker’s moustache), it’s perhaps appropriate that not every scene works and some jokes fall hard. There are pretty long stretches at the start which can seem uncomfortable for the sake of it, and it makes you wonder whether an 80 minute feature is too long to keep this material limping on (I thought the same about BATMAN: THE MOVIE). Luckily, the aforementioned brilliant second half more than makes up for the tumbleweed (intentional or not) of the film’s beginning.

The animation is more beautiful than it has to be, laughs come thick and fast and I still get chills when I hear that iconic theme tune rearranged and amped up. 2016 hasn’t been a good year for Batman on film, but Return of the Caped Crusaders has made the hard slog worth it. Whereas BATMAN V SUPERMAN was monotonously grim and unintentionally funny and THE KILLING JOKE was uncomfortable and miscalculated in the extreme, revisiting the colourful 60s iteration of Gotham’s protector has been a roaring success. Affectionate towards its origins but not beyond moving characters on and providing challenging character arcs, this is not only gleefully silly and fun, but braver and more mischievous than most of 2016’s output. Bring on the next one, I hear the Dynamic Duo are going up against William Shatner playing a Batman villain considered too gruesome for the TV show… SSP

2 Responses to Review: Batman: Return of the Caped Crusaders (2016)