Posted on October 2, 2016 by Sam Sewell-Peterson 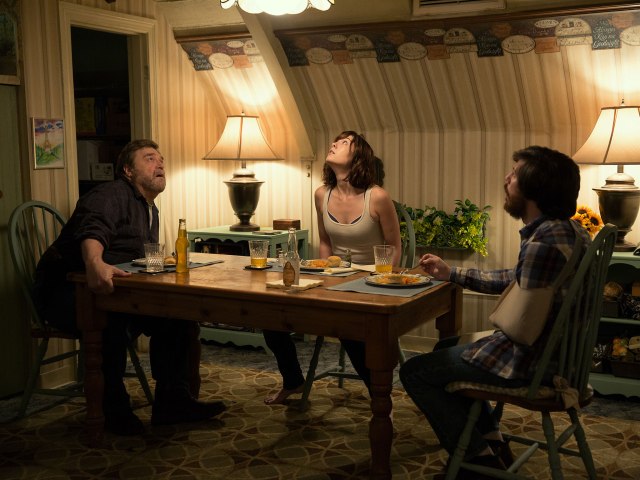 Who’d have thought one of the best films released in 2016 was a (sort of) sequel to CLOVERFIELD? Much like this year’s BLAIR WITCH this one has come to us by stealth, not revealing what it is until the very last minute. As really it’s a spoiler to even outright say whether or not this is a sequel, I’m going to leave it for you to watch for yourself, but suffice to say 10 CLOVERFIELD LANE does a lot with this brand recognition and the associations that name has to keep you guessing throughout. The appeal doesn’t end there though, and this becomes an incredibly satisfying film on its own terms.

Following a car crash, Michelle (Mary Elizabeth Winstead) finds herself trapped in a bunker lorded over by the considerably unstable ex-marine Howard (John Goodman). Howard claims that the world outside has ended, that he, Michelle and fellow bunker inhabitant Emmett (John Gallagher Jr) are the only survivors, but just how much can the lord of this confined domain be believed?

10 Cloverfield Lane plays on paranoia wonderfully. How much of Howard’s story is true and what risks can Michelle and Emmett take proving it not to be? The film very cleverly goes back and forth over what is true and what isn’t throughout – just when you think Michelle has gotten to the bottom of the mystery another complication raises further doubts. Characters’ paranoia drives the plot over the course of the film and even plays a major part in altering the balance of power in the bunker later on.

This becomes the most screwed up family sitcom in history with dinner table arguments, bathroom arguments and boardgame arguments to go with the fear of imminent death. Howard’s twisted view of the trio’s relationship, with him as a protective father and Michelle and Emmett as his vulnerable and occasionally disobedient children shapes the whole middle act of the film.

Goodman can make smiling, dancing, even playing charades absolutely terrifying. Howard’s one word of wisdom before Michelle shimmies into an air vent to fix a life support system is “Neither of us will be able to help you if you get stuck…don’t get stuck!” It’s great to see him getting so much out of a meaty role again. This is among Winstead’s most accomplished and nuanced turns. Michelle is really taking through the emotional ringer, she is far from a damsel in distress and is forever trying to work things out and outsmart her captor. John Gallagher Jr has shown a hell of a range this year playing both the mild-mannered Emmett here and a complete psychopath in HUSH. As such a punchy little chamber piece, you really don’t need any other performers when you have these three playing off each other so beautifully. This would work equally well as a stage play as it does as a movie.

There’s a certain plot item that makes this share some DNA with BREAKING BAD, and considering some of the brutal imagery in evidence on that show I think they could have probably been more extreme when a character comes into contact with said item. I’d also say that when the answers finally do come I was disappointed. I was still entertained, but it would have to be one hell of a revelation to deliver on the promises of all that buildup and misdirection.

10 Cloverfield Lane is a knife-edge chamber piece with a loose connection to a recognised name. I’d have almost preferred it if first-time feature director Dan Trachtenberg didn’t need the brand to get people to put their money down, because once you’ve started on this ride you will be hooked, Cloverfield or not. SSP