Posted on September 18, 2016 by Sam Sewell-Peterson 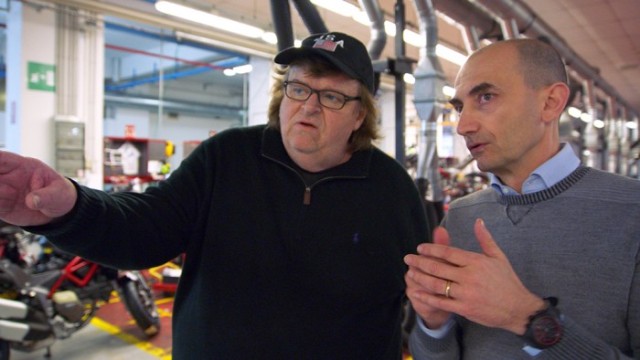 Michael Moore famously doesn’t beat about the bush (or Bush). WHERE TO INVADE NEXT (should that be phrased as a question?) opens with a montage of Washington DC’s landmarks accompanied by the whir of helicopter blades and an action movie drum score. Moore sets the tone with his first sardonic statement: “I was quietly summoned to the Pentagon to meet with the Joint Chiefs of Staff”. He then proceeds to reel of a list of wars the USA has lost. The only logical next step of course was to go and see what the US of A was missing from around the world.

In a series of “polite invasions”, Michael Moore journeys to distant lands with a big flag to steal all their best ideas to bring back to the United States.

It’s a neat idea for a documentary – send Moore on a travel log to highlight things other countries do better than the USA, and stick it to The Man at every opportunity along the way. There’s a lot to like about America, and I really think Moore is proud of his nation, but at the same time his home country’s faults have always infuriated him.

Countries he visits are assessed with tongue-firmly-in-cheek according to fun facts (for Germany: “none”), threat level and notable citizens. Any shots taken are playful (Moore’s incredulity at the best-educated country on his travels, Finland, also being home to the Air Guitar World Championship and the sport of “Wife Carrying”). Along the way he aims to steal paid, even incentivised vacations for stress relief from Italy, happy, stimulated and non-competitive students from Finland, women’s rights and government-funded contraception and abortion services from Tunisia. He even brings back a message from Portuguese cops to their American counterparts: “As long as you allow the death penalty to exist, human dignity can’t be protected”.

It’s pretty positive stuff from Moore for once, unless he’s taking snide swipes at the country he is trying to fix, that is. “Taxes in America pay for the basics – police, fire, roads, water, war, and bank bailouts”. Playful jibes and stereotypes give way at points to his anger at his home nation seemingly refusing to give into reason when he has a point to make – Moore sees American prisons as the modern equivalent  of the slave trade in the way inmates are trapped in an infinite loop without reprieve, for instance.

I don’t think he really needed to bring up Hitler and WWII atrocities in the Germany segment as it doesn’t really add to his thesis. As sincere as showing German schoolchildren marking and understanding what their grandparents did, it’s just there because it’s expected of a trip to Germany and Moore wasn’t going to leave without touching on the subject. It all comes across a bit Hallmark, a bit cheesy-inspirational for the sake of it and is at odds with Moore’s more cutting analysis elsewhere. A later segment highlighting Anders Breivik’s attacks in Norway in 2011 has more of a place and more impact as it feeds directly back into what Moore was talking about – Norway’s seemingly lapse attitudes to crime, punishment and justice.

Moore’s persona can be love-hate for many. I’d say that he attempts to cover too many subjects, and too broadly, and that he’d be better tightening his focus and attempting fewer arguments in a more detailed and analytical essay. He does, and has always, made sweeping generalisations, but he also highlights some interesting points as evidence to back up his argument. Where to Invade Next may only be genuinely thought-provoking occasionally, but it is consistently entertaining. SSP

Writer and film fanatic fond of black comedies, sci-fi, animation and films about dysfunctional families.
View all posts by Sam Sewell-Peterson →
This entry was posted in Film, Film Review and tagged Documentary, Film, Michael Moore, Movies, Where to Invade Next. Bookmark the permalink.