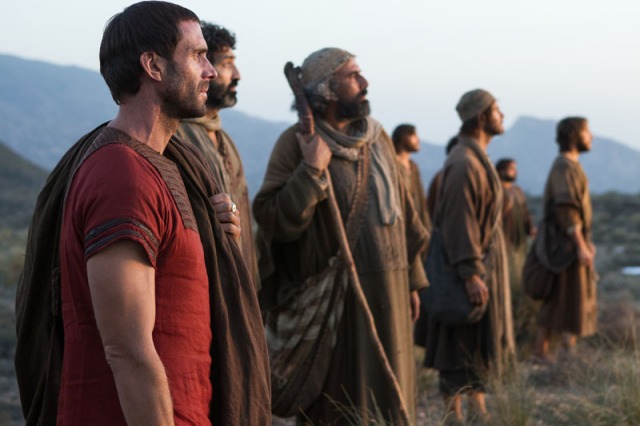 I don’t think we’ve ever had a Roman film noir before (please tell me if I’m wrong on that). If RISEN had lent more on these distinctive tropes or even retained a modicum of ambiguity by the end, it could have been something truly unique. As it is, it’s a curiosity and little more.

Jerusalem, 33 AD. The proclaimed Messiah of the Hebrew faith Yeshua (Cliff Curtis) has been put to death by Crucifixion at the order of Roman Prefect Pontius Pilate (Peter Firth). Thinking that a potentially disastrous uprising has been quashed in the province of Judea, a desperate investigation is undertaken by Pilate’s Tribune Clavius (Joseph Fiennes) when the Nazarene’s body disappears from his tomb one morning.

The Roman War Machine and the uncompromising way they kept Judea in check for so long is uncompromisingly realised. The cruel brutality and efficiency of crucifixion as a way to control a population’s dissenters, their taking down of the expired before they are cold to make room for more examples to the Empire is a horrific visual.

Following Yeshua’s Crucifixion, Peter Firth’s greasy take on Pilate asks Clavius,”The Nazarene – you found him different?”, to which his tribune responds blankly, “I found him dead”. Clavius is unflappable and rational from the off, the very last person you would expect to have any kind of experience to make him question his faith. It’s a bold move to present Biblical miracles so straight, so matter-of-fact, but the earnestness and the varied characters, who all feel like real people acting like real people in that time period would (Curtis is a disarming Yeshua and his disciples are shown to range from harmless hippies to rebels and world-weary old men) help a great deal to sell it.

The Romans see Yeshua as a fanatic who might gain a “monopoly on piety” in Judea and beyond. The miraculous resurrection is explained away as the Hebrew plot for his body to be stolen in the night by his followers to inspire divine worship. That is, until the loyal Hebrew priests seem just as bewildered as the Romans when a miracle does occur.

It’s a neat time-sensitive plot device, that Clavius has to find an intact corpse before it decomposes beyond recognition in order to debunk any claims of divinity. By the state of the body pits we fleetingly see below the ghastly frames that slowly bled the life out of so many, time really is a factor.

I had to turn on the subtitles pretty early because either the sound-mixing is terrible or everyone is mumbling all the time. The scenes of Romans searching Hebrew homes and of Yeshua performing miracles unfortunately bring to mind LIFE OF BRIAN. The production design in general is about on par with Monty Python’s Bible comedy, and that’s not a criticism because they spent a lot of money on location shooting and costumes.

The way the story of Risen is structured, from the cynical Clavius’ perspective, you’re expecting there to be a final twist. There isn’t really, which might make those of a non-religious persuasion struggle. If this is you, just think of it as a “what if?” story. What if a non-believer saw something they could not explain? Clavius’ journey eventually brings him to admit that “I cannot reconcile this with all I know”. It’s a well-mounted and performed tale with a solid script from Kevin Reynolds (yes, as in the guy behind ROBIN HOOD: PRINCE OF THIEVES). Regardless of your beliefs – and it thankfully never gets too preachy, not being a Bible movie per se – it’s engaging enough. It’s not going to be for everyone, and it might have been more worth recommending if they’d have made more of the mystery in this historical mystery thriller. SSP

I'm not paid to write about film - I do it because I love it. Favourite filmmakers include Bong Joon-ho, Danny Boyle, the Coen Brothers, Nicolas Winding Refn, Clio Barnard, Steven Spielberg, Guillermo del Toro, Paul Verhoeven, Taika Waititi and Edgar Wright. All reviews and articles are original works written and owned by me. They represent one man's opinion, and I'm more than happy to engage in civilised debate if you disagree.
View all posts by Sam Sewell-Peterson →
This entry was posted in Film, Film Review and tagged Cliff Curtis, Film, Film noir, Historical Drama, Joseph Fiennes, Kevin Reynolds, Life of Brian, Movies, Mystery, Peter Firth, Risen, Robin Hood: Prince of Thieves. Bookmark the permalink.