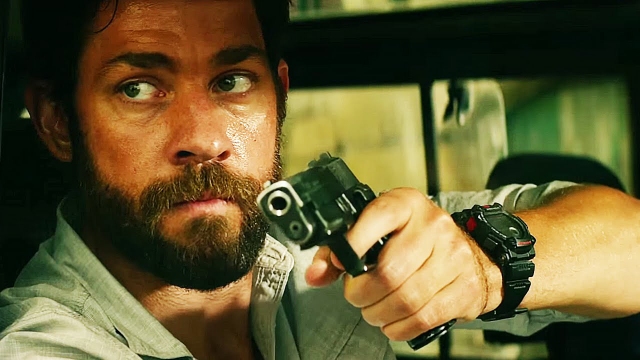 13 HOURS is supposedly Michael Bay being serious, talking about a still-raw real-world event, namely the aftermath of The Arab Spring uprisings in Libya. Yet we still have a character saying of a neutralised weapons smuggler:”We gotta find his stash and level it with hellfire!” and a paramilitary asset announcing his arrival with: “I need a bagful of money and a flight to Benghazi”. You can’t have it both ways, Michael.

Following revolution and the fall of Colonel Gaddafi, Libya, and especially the populous city of Benghazi, became one of the most dangerous locations in the world to find yourself trapped. On September 11 2012 a team of CIA agents acting as bodyguards for a diplomatic envoy found their compound besieged by Islamist militants. This is their story.

Bay still likes having his camera fawn over people. In TRANSFORMERS it famously focussed on Megan Fox bending over a car. Here, with a lack of scantily clad women (predictably for Bay, he has cast the most beautiful diplomatic office in history, but they are thankfully all dressed appropriately) he instead oggles his manly men working out, leering over rippling six-packs and shiny biceps.

It’s nice to see a change of pace from Michael Bay in the film’s first 45 minutes or so where we just follow the operatives chatting about life and their families and joshing frat-style with each other. Bay just holds back and lets this real situation wash over us. It is here, and towards the end when the chaos dies down that Jack (John Krasinki) and his brother Rone (James Badge Dale) are given room to emote and bring out what nuance there is in Chuck Hogan’s script. Then everything kicks off, Bay chucks his tripod aside, rubble flies and Lorne Balfe’s soundtrack begins to blare constantly.

That shot prominently featured in the trailer of Islamist militants machine-gunning a mournfully billowing American flag in slow motion is in there, essentially signalling the start of the action, and it’s as terrible and misjudged an idea in the film as in the marketing. It’s fine that Bay is a patriot, what’s less fine is him bellowing jingoistically to drown out a far from one-sided debate.

The battles can be confusing, but I actually think this was intentional. So many groups are running around shooting at each other and it’s rarely clear who is who and what they are fighting for. The line between friend and foe remains indistinct throughout and we are left in doubt even about the Libyan friendlies by the end. This all sums up the convoluted motivations driving the Arab Spring nicely for Hollywood storytelling purposes. The Americans have one group fighting with them, several other groups fighting against them and one guy fighting with them turns out to have one of their adversaries’ mobile phone numbers.

I must admit that I was drifting during the second half of the film. The gunfire and explosions quickly become monotonous and the linking scenes where tactics are planned are pretty tedious. A moment where Jack realises to his equal horror and bemusement, that he hasn’t thought about his family throughout their desperate operation is the only reminder of the humanity of this story. Even this reminder of people feeling people things is only from an American perspective. Though the story one-sided, I guess it’s the only way it could be presented with the characters we are focussing on – soldiers dying “In a place they don’t need to be over something they don’t understand”. It’s almost an anti-war stance from the usually gung ho Bay. Almost.

At the end of it all we are left to count the cost. Bay gives the Libyan dead a cursory mention then dedicates nearly ten minutes to mourn the American heroes. A tattered American flag lies in a muddied pool. When Michael Bay isn’t bludgeoning you over the head with Stars and Stripes and allows the talent of Krasinski and Dale to come to the fore, this is pretty good stuff. But when he falls back on his worst habits he undermines the story he is telling and so 13 Hours ends up being purely competent rather than anything that will stay with you, at least not for the right reasons. SSP