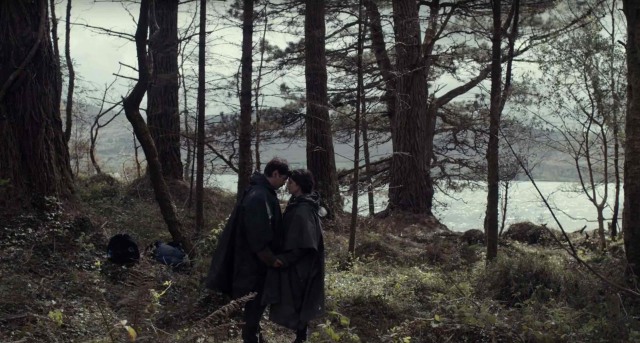 Well file this one comfortably (or uncomfortably) under “flawed but fascinating”. THE LOBSTER is a symphony to loneliness, an essay to alienation. It constructs a bizarre and jarring world inhabited by the miserable and the hollow, then asks you to reside in it for a spell. Good luck…

In a society where being single has been deemed illegal, David (Colin Farrell) finds himself without a mate. He is sent to a luxury hotel full of likewise lost souls and given a choice: find a suitable companion within 45 days or be turned into an animal and released into the woods. The one silver lining is that he gets to choose what he will become.

The conceit is simple one: being single in this world is seen as an illness, as dangerous for society as a whole so you have to find a partner through formula to save yourself from forced transformation into an animal. Everyone plays it monotone and awkward (an interesting choice, but arguably an excuse for wooden performances as well); personalities are defined almost exclusively by people’s distinctive physical traits or interests and everything about this reality is a little wrong. This wrongness makes it difficult for us to like, or even be all that interested in anybody, but also allows for some clever gags. You’ll find humour here that exists nowhere else, like how the evil hotel staff use guests’ libidos against them to force them to find a suitable partner out of desperation (David’s response to a cruel and unusual daily torment “That’s just…awful”); Olivia Colman’s Hotel Manager stating that any couples who begin to argue on a regular basis “will be assigned children”.

The tone of the thing is admittedly weird. Some of the stylistic refrains – particularly a regularly repeated musical motif and the completely unnecessary narration – irritate greatly after a while. We see David feel something, then the narration reiterates what he feels then we get a burst of that grating music. The emotionless commentary on events are tied to the way a particular character is written, but in practice it doesn’t work. It’s at these points you want writer-director Yorgos Lanthimos to stop faffing and just get on with it.

It’s great to see Colin Farrell in an interesting lead role again, and he plays vulnerability with humour like nobody else can. Rachel Weisz does what she can with her limited character and the final act of the film achieves poignancy mostly through her, but the supporting players in the film’s first half, chiefly Colman, Ben Whishaw and Michael Smiley, eclipse her without really having to try.

The film certainly loses something when it leaves the confines of the hotel. I think this kind of oddball story only really works within the limitations of that kind of space. The final stretch consists of a lot of moping around the deserted woods (where you wouldn’t be surprised if they bumped into the cast of THE SURVIVALIST) or moping around deserted cities. A plotline involving otherthrowing the establishment goes nowhere so you wonder why it was included at all. I guess there had to be something else in addition to the relationship drama if so much effort is being put into you not being able to feel for these couples.

The Lobster is a film I can appreciate from afar rather than really enjoy. So much distance is intentionally kept between characters and their emotions, in addition to distance between the viewer and the characters, that it becomes quite hard to care. It evokes a feeling of otherness throughout really well, but ultimately glimmers of brilliance and twisted humour are eclipsed by an exhausting premise and unnecessarily brash styling. SSP

I'm not paid to write about film - I do it because I love it. Favourite filmmakers include Bong Joon-ho, Danny Boyle, the Coen Brothers, Nicolas Winding Refn, Clio Barnard, Steven Spielberg, Guillermo del Toro, Paul Verhoeven, Taika Waititi and Edgar Wright. All reviews and articles are original works written and owned by me. They represent one man's opinion, and I'm more than happy to engage in civilised debate if you disagree.
View all posts by Sam Sewell-Peterson →
This entry was posted in Film, Film Review and tagged Ben Whishaw, Black Comedy, Colin Farrell, Film, Michael Smiley, Movies, Olivia Colman, Rachel Weisz, Sci-fi, The Lobster, The Survivalist, Yorgos Lanthimos. Bookmark the permalink.