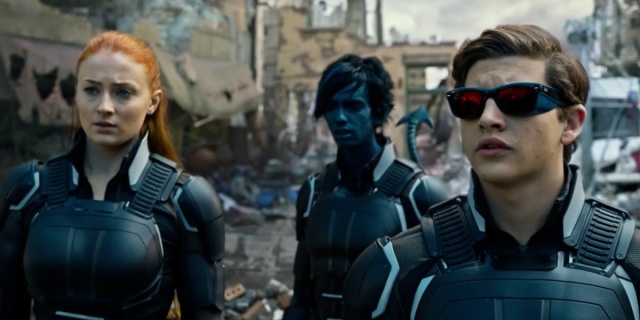 Well, as superhero movies go it’s certainly better than BATMAN V SUPERMAN. This time they try out a bit of self-aware humour when Xavier’s new students come out of seeing RETURN OF THE JEDI agreeing that “the third one is always the worst”. This was probably intended as a belated apology for LAST STAND but could equally apply just as well here – X-MEN: APOCALYPSE is the scrappiest and least successful of the mutant prequel trilogy.

When the first mutant Apocalypse (Oscar Isaac) awkakens after a long enforced hibernation and seeks to bring about the end of the world, only Professor Xavier (James McAvoy) and his burgeoning team of X-Men stand in his way. The X-ranks may have grown to include psychic Jean Grey (Sophie Turner), concussive blaster Cyclops (Tye Sheridan) and teleporter Nightcrawler (Kodi Smit-McPhee) but Apocalypse has indoctrinated four powerful followers to go up against the X-Men as well, most prominently a certain Master of Magnetism (Michael Fassbender).

As ensembles go, it’s another impressive but wonky one where not everyone gets their moment to shine. McAvoy is still the series MVP as a Professor X with more humour and more pain to his portrayal and Sheridan is a fine new addition as an uppity Cyclops with endearingly awkward chemistry with Turner. Jennifer Lawrence and Nicholas Hoult have clearly had words with their agents and ended up with less time in blue. In their place, Smit-McPhee is on full blue duty as a jollier, more mischievous take on Nightcrawler. Apocalypse’s multiple powers have near-unlimited scope and yet somehow he doesn’t feel all that threatening, interesting or comprehensible a character despite Isaac’s best efforts behind the makeup. Fassbender gets the thankless task of floating and staring dreamily into the middle distance for much of the film’s final act and the other horsemen do little more than stand around and scowl (Olivia Munn’s Psylocke might get a couple of lines and opportunity to swing her energy blade around but still essentially functions as window dressing straight from the comics).

We get another inventive Quicksilver (Evan Peters) high-speed action sequence that’s bigger, funnier but somehow less satisfying than the kitchen scene in DAYS OF FUTURE PAST (maybe they picked the wrong song?) plus a trippy psychic battle between Professor X and Apocalypse, but elsewhere the spectacle left me cold, even bored. There’s only so much time you can watch sand cyclone and buildings tear apart and reform in Egypt before you get horrible TRANSFORMERS 2 PTSD flashbacks. The fight scenes are incomprehensibly edited and pretty basic in terms of choreography and we don’t really get a sense of the X-Men working as a team until just before the cut to black at the end. At one point some of our heroes are taken to a key location from an earlier film that adds nothing to the story, only a pretty violent stop-off and fanservice.

A lot of the material is doom-laden, relying on us as an audience realising that Apocalypse destroying everything would be a bad thing (but still requiring exposition dumps from guys in suits) but mercifully there are some chucklesome gags as well. These come from Xavier’s cringe-worthy belated reunion with old flame Moira Mactaggert (Rose Byrne), Cyclops’ uncontrollable destructive power in the midst of an idyllic place of learning and a strategically placed F-bomb. Other moments I think we were meant to take seriously, chiefly Magneto’s attempt to settle down as a steelworker in the Polish countryside (really) are difficult to keep a straight face at.

As patchy as the X-Men series has been over the last 16 years, when I hear that John Ottman theme build and the titles shoot forth (usually along DNA strands, this time through time itself) I still can’t help but get chills. I love the X-Men and all they represent, but even I am getting a little weary at this stage. Yes it’s nice to see a proper X-Men team, looking as they should, by the end credits, but it’s been a long old slog to get to that moment. Bryan Singer could have probably done with half the cast, a good polish on Simon Kinberg’s screenplay and more coherency of character and plot as a whole and it might have resulted in something that’s more than sporadically entertaining. SSP