Posted on November 11, 2015 by Sam Sewell-Peterson 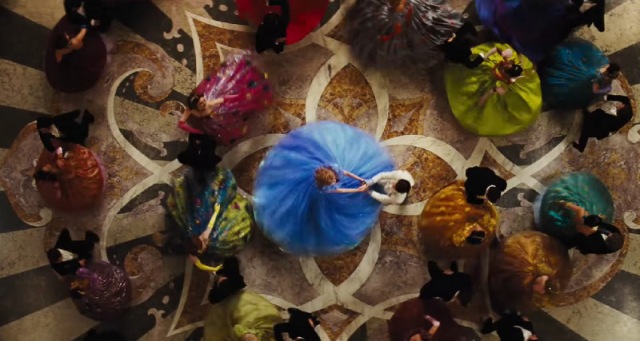 May I have this dance?: Walt Disney Pictures

Did you really have to put the talking mice in it again, Disney? Rodents shouldn’t have facial expressions! I’ve never really had that much affection for Walt’s 1950 animated “classic” – I always found it a bit simpering and wet. Kenneth Branagh’s take on CINDERELLA for me was a vast improvement.

Once upon a time Ella (Eloise Webb) was a happy and carefree child. Her life is rocked with the tragic  deaths of both her parents (Hayley Atwell and Ben Chaplin) and unfortunately her father sought solace in another before he passed. Now the fully-grown Ella (Lily James) finds herself in the enforced servitude of her stepmother (Cate Blanchett) and her daughters (Sophie McShera and Holliday Grainger). Ella has a good heart and a naturally positive nature, but she might also need the help of a little magic to improve her lot in life…

Of course, being a European fairytale adapted by Disney, Ella is extremely unfortunate to have two perfect parents who love her. Being nice in these kinds of stories doesn’t usually result in a long life expectancy. We never saw Cinderella’s parents in the animated film, but they’re given very sympathetic faces here in Atwell and Chaplin to make it all the more heart-wrenching when Ella loses them both in quick succession and falls under the thrall of her cruel step-relatives.

The other thing Disney do well apart from death is morals. “Have courage and be kind” is a doozy. Lily James coveys this ideal radiantly whenever she’s on screen, but even Ella’s patience and good nature can only be stretched so far (unlike the animated character, who practically lay down and submitted). Here she is actually given a reason to stay in her parents’ house and put up with her horrible treatment. She also meets her prince by chance long before the ball, resulting in a certain spark but not quite love at first sight (their feelings understandably take full hold on their second, grander meeting). Their scenes together are key of course, and Lily James and Richard Madden make them shamelessly romantic and a little bit sexy.

Blanchett has Lady Tremaine’s heartless, icy grin from the cartoon down to a tee, and revels in her Machiavellian scheming. I liked the take on the Ugly Step Sisters here too – ugly within, fair without, and without a drop of wit, talent, or self-awareness between them. Helena Bonham Carter makes for a pleasingly dotty Fairy Godmother who always seems to speak through the bottom row of her fake pearly teeth.

It’s handsome and well-appointed throughout, with stately cinematography and stunningly lavish production design. Cinderella and the Prince’s costumes (courtesy of the ever-reliable Sandy Powell) for the recreation of the iconic royal ball scene results in a little heart-flutter, as they should. Also lovely is Patrick Doyle’s score.

Unlike Disney’s previous fairytale reimagining MALEFICENT, adding richer details to this story has resulted in more satisfying whole. We didn’t really need to know why Ella becomes known as Cinderella, but the film does satisfyingly explore the importance of “marrying for advantage” over love, the only real option for royalty and aristocrats in 17th Century Europe. The royal family throw their ball to guarantee the future of the kingdom as their monarch (Derek Jacobi) ails, and Lady Tremaine sees it as an opportunity to secure her family a life of privilege through manipulation. She is not given unnecessary reasons for her horribleness, she just is.

It helps that it’s all played pretty straight (mice aside) and traditional. The story is expanded just enough to make as much sense as a fairytale can, but smartly nobody tries to dial down its inherent romanticism. It doesn’t reinvent the wheel on the pumpkin carriage, and these are characters you’ve seen countless times before, but it’s a reassuring, pretty and appropriately embellished fairy tale. If Disney has to keep remaking its animated back catalogue, (and apparently it does) then I hope for more like this. SSP