Posted on August 9, 2015 by Sam Sewell-Peterson 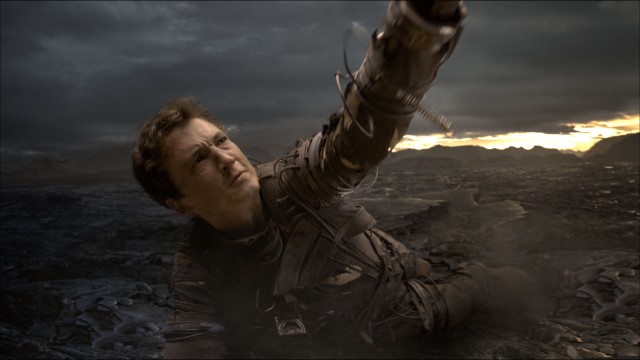 “A year ago I had a fantastic version of this. And it would have received great reviews. You’ll probably never see it. That’s reality though.”

The above was posted by FANTASTIC FOUR director Josh Trank on his Twitter page following the torrent of damning reviews of his follow-up to CHRONICLE three days ago. It was then hastily deleted. This along with horror stories of Trank being locked out of his own editing room adds credence to the theory that 20th Century Fox leaned on Trank and sabotaged the young director’s chances of making the film that he wanted to. We may never know why. Whatever actually occurred behind-the-scenes, the fact remains that Fantastic Four as a final product does not work at all, and sadly it is this movie I must review rather than a hypothetically much better one.

Reed Richards (Miles Teller) has been working on a breakthrough in human teleportation since he was a boy, and is given the chance to realise his dream when Dr Franklin Storm (Reg E Cathey) offers him a scholarship and a team of like-minded young geniuses to work with. Reed, along with childhood friend Ben Grimm (Jamie Bell), Dr Storm’s children Sue and Johnny (Kate Mara and Michael B Jordan) and the only man who might be more brilliant than him, Victor Von Doom (Toby Kebbell) successfully travel to another dimension, but a disastrous attempt to return to their world has unexpected and damaging consequences.

For the first 30 minutes or so, I was with the film. It builds the characters and their motivations well enough, establishing Reed and Ben’s unbreakable bond and shared dreams; the Storm family’s dysfunctionality; and Victor’s disdain for anyone less intelligent than him, which is pretty much everyone. There is a workable rationale for why scientists would want to transport themselves to another dimension and why the Four develop the specific powers they do, though I’m not sure about the Cronenberg-y body horror with this material. Then something breaks.

The second half of the film has nothing. No character, no plot, no emotion, no coherence, no value whatsoever. Whatever Trank intended his film to become, it has been completely and utterly gutted. Entire sequences are missing and the resulting mess is utterly incomprehensible. We leap from the accident to the Four being used as military assets to the default sci-fi-disaster final act without pausing for breath. There’s no contemplation, no room for the actors to experience or convey all this physical and emotional turmoil, unless you count Miles Teller pulling the odd pained expression or mo-capped Jamie Bell doing sad eyes. There was clearly once much more connective tissue, something to make these characters and their actions make sense, but not anymore.

The casting is probably about as good as it could be if you’re committed to the Four and Doom being young adults. I’m still convinced that Mr Fantastic should always be middle-aged, the group’s father figure, and Teller is fine in the role, but is often stuck on exposition duty. Michael B Jordan being one of the most charismatic young actors of his generation playing arguably the most confident superhero of them all is well-cast, as is Bell in his human form playing another poor kid from a rough neighbourhood. Mara sadly has far too little to do throughout, and the usually-excellent Kebbell is essentially just a special effect for the final act, and not a particularly good one at that.

A story dealing with parallel dimensions opens up infinite conceptual and visual possibilities. The dimension our heroes travel to could look like anything, operate with any kind of physical laws. Josh Trank – and this is a criticism I will lay at his feet rather than the studio’s – went for a rocky planet with a few glowy bits. It’s the lowest possible rung on the imagination ladder, especially in a story aiming to explore scientific concepts so complex and far-reaching. Trank doesn’t even shake things up visually when Doom takes over his new domain in earnest. This could have been Doom remoulding an entire planet in his own image, but Trank thought just making a few rocks float and muting the background colour was enough.

Josh Trank has proven he can be an imaginative young filmmaker. Some directors would kill to have such a successful and distinct debut as Chronicle, and I’m not prepared to write him off after a single misstep. I wouldn’t bank on him working with a big film studio again for a while though, and hopefully he’ll rediscover his creative drive back in the independent film circuit. And as for Fox? Well they won’t be making another of these, and I doubt they care all that much if the rights head back home to Marvel as long as they can still milk the X-MEN for all they’re worth. Since it’s so stylistically unremarkable and butchered in the edit, all this latest take on Marvel’s First Family will be remembered for is as a mark of a film studio’s hubris. SSP