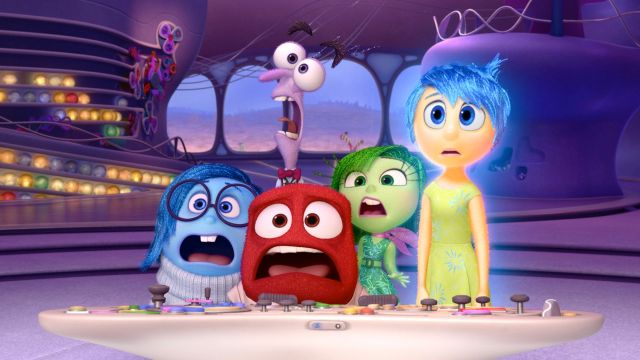 INSIDE OUT could be Pixar’s most satisfying ever effort for parents to enjoy alongside their children. For all the vivid colours and goofy characters, we’re also presented with a mini psychoanalytic thesis and big real-world issues that have formidable dramatic heft.

Eleven year-old Riley’s (Kaitlyn Dias) comfortable existence is rocked when her parents decide to uproot and move from Minnesota to California. As her familiar life collapses around her and she struggles to cope with all the changes, inside her head Riley’s Emotions embark on a quest to keep Riley Riley.

Pete Doctor has always been a great ideas man and a tuned-in satirist. Some of the concepts he and his team of screenwriters have come up with are genius – not only do they set up punchlines, but also add depth to this world of imagination. Take Riley’s Studio Ghibli-esque hovering islands of personality, or the Emotions hitching a ride on the Train of Thought to get back home. On this journey they accidentally mix up boxes of opinions and facts (“Don’t worry, it happens all the time!”); point out déjà vu as a landmark multiple times; and pass by memory workmen busy clearing Riley’s head for new information (“she doesn’t need all these numbers, they’re in her phone!”, “Presidents? Just keep Washington, Lincoln and the fat one!”).

Another of Pixar’s old hands making a return is maestro composer Michael Giacchino. Giacchino has produced some beautiful music before, and his soundtracks always enrich a story, but Inside Out is among his finest scores. It’s somehow intimate and epic, and pretty much sums up the whole film as such.

As always with Pixar films, the gags aimed at the parents are a strange and random mixture, from jokes about psychoanalysis and major art movements to a completely out-of-the-blue CHINATOWN riff. I also imagine couples will get a kick out of seeing the full version of the dinner table scene that featured in the film’s first trailer, where we get to see Mom and Dad’s (Diane Lane and Kyle MacLachlan) emotional workings as they’re trying and failing disastrously to connect with Riley.

The film’s solutions to plot problems are as ingenious and creative as the are surreal. There’s a scene set in a film studio that manufactures dreams that feels (appropriately given Doctor’s involvement) very MONSTERS, INC with all its bored-looking workers doing extraordinary things on autopilot. At one point, to cross a ravine an Emotion uses a ladder made from Riley’s imaginary boyfriends. Pixar have done two mismatched friends on a journey before, but rarely have they had to think this hard to navigate such a complex and bizarre world that runs on its own unique logic, and keep the characters and their motivations consistent within it at the same time.

I see Inside Out as the natural, more sophisticated successor to SNOW WHITE AND THE SEVEN DWARFS. Disney’s eponymous diminutive miners had one dimension only, namely whatever emotional state their name was derived from (to this day I still don’t understand why Doc isn’t Brainy). The Emotions in Inside Out have dominant traits, but are all three-dimensional characters with full personalities as well, and the flawless voice performances (notably Amy Poehler and Phyllis Smith) reinforce what is among the most expressive character animation I’ve ever seen. Another reason why the Seven Dwarfs themselves were merely serviceable rather than great characters was they only had the personality and aspiration dead-end that was Snow White to interact with. The Emotions in Inside Out are fighting to keep Riley, a pre-teen that feels so real you could bump into her in the street, the best version of her herself she can possibly be.

I loved the idea that life begins with the purest emotion of all – joy, but as life is life sooner or later we have to give way to a certain amount of sadness. Sadness isn’t always a bad thing, however, and doesn’t last forever. Riley eventually finds a comfortable bittersweet existence by the close of the film, and that’s ultimately what we as people are aiming for. Inside Out is a beautiful film about achieving emotional harmony that manages to be warm and humorous while also providing enough food for thought to sustain even the most hardened and cynical adult. That’s the only kind of person I can see finding real flaws with Pixar’s latest – those who are unwilling to give in to humanity’s inherent emotionality. Life isn’t perfect, but neither are people. All you can hope for is to level out at some stage and find a balance between joy, fear, disgust, anger, and sadness. SSP