The Grey and the Greyer: Heroes and Villains on Netflix’s Daredevil 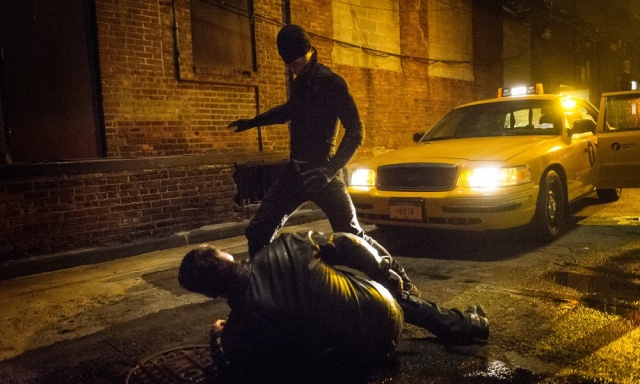 I know in the past I’ve defended Mark Steven Johnson’s much-derided Ben Affleck-led DAREDEVIL, but even I’ll admit it looks pretty ropey compared to Marvel’s latest forrey onto the small screen. It will surprise nobody to learn that Marvel/Netflix’s Daredevil is a hit, and a big one at that. The studio has been dominating the big screen box office for close to a decade, and the streaming service has been going from strength-to-strength as an alternative platform for entertainment for a while now too. The way we watch our movies and TV is changing. What also seems to be changing are the movies and television shows themselves.

Being a Marvel production, Daredevil was always going to be well-made on a purely technical level. The cinematography, lighting, choreography, production design and music are close to flawless. An aspect of bringing the show to life that could have gone either way – and gas done in the past with their less successful films – was the script. Would it be any good? Would it evoke the spirit of the Man without Fear? Would it do a anything different and exciting? The answer to all the above us a resounding “yes”, largely thanks to the boldness of vision and deft folding in of complex themes and morality throughout, all fronted by the series’ brainchild Drew Goddard and showrunner Steven S DeKnight.

Morality is a tricky thing to handle on such a far-reaching medium. You don’t want to appear preachy or self-righteous, but at the same time you don’t want to look like you’re condoning monstrous behavior in humanity. Daredevil gets this balance right, but doesn’t make it an easy ride, morally speaking, for the viewer. It challenges us, asks us to interrogate our own consciences. In it’s way, it’s (appropriately for the central character) very Catholic.

Either Matt Murdoch/Daredevil (Charlie Cox) or Wilson Fisk/Kingpin (Vincent D’Onofrio) could conceivably by the villain in this story. Both believe passionately, fanatically, in saving their city. Both can be violent and extortionate, it’s just a matter of extremes. One will beat someone to a pulp to gain information, stopping just short of killing them, the other will decapitate someone with a car door for embarrassing him in public. Extremes, see? OK, bad example. Daredevil’s the hero, Kingpin’s the villain. But that doesn’t mean I wasn’t sometimes on Fisk’s side, that I didn’t sometimes question why I was rooting for Matt. Both are capable of great cruelty, of atrocities, does it really make a difference what their motivation is? Is the quest for justice as a violent vigilante that much better than being driven to violence by greed and pride? As Murdock’s partner-in-law and best friend Foggy Nelson (Elden Henson) pointedly states late in the season (talking about Fisk, but applicable to Matt): “You can’t just run around killing people and call yourself a human being”. Neither our blind vigilante or our crime kingpin are idealists, rather this story follows the battle between a pragmatist and…another pragmatist.

It makes one hell of a difference that the writers bothered to humanise, to give layers to Fisk’s character early on. Charlie Cox is great, making Matt Murdock as compelling a protagonist as humanly possible,  but it is D’Onofrio’s light touch and emotional versatility playing the hulking crime lord that makes the most impact. He is a monster, but you can at least understand his motivation, you can see his point of view. Matt might be constantly fighting not to “let the Devil out”, but he could potentially be far more dangerous if he ever does entirely lose control. Fisk knows exactly what he is, he knows what he is capable of, Matt is still finding himself and discovering his limitations. They make for a fascinating contrast, not polar opposites by any means, just on different stages of their journey, and both forged in the fires of circumstance.

The plotting on the show is admittedly pretty standard (though well done) stuff, but as a character piece it really excels. It is Matt Murdoch and Wilson Fisk, their battle and their arguably similar view of a “world on fire”, their differing perspective of how to save it, that makes the show. I’m looking for great things for the rest of Marvel’s DEFENDERS TV event following such a powerful opening salvo. Bring on A.K.A. JESSICA JONES, LUKE CAGE and IRON FIST! SSP