Posted on January 8, 2015 by Sam Sewell-Peterson 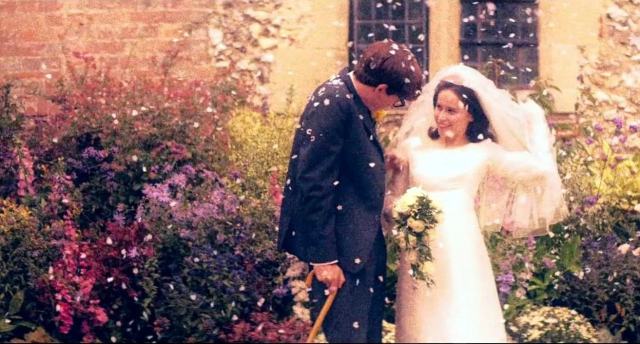 How do you sum up the life of such an extraordinary human being? Director James Marsh, writer Anthony McCarten and principle actors Eddie Redmayne and Felicity Jones prove that you have to start from a place of emotion, and THE THEORY OF EVERYTHING is an absolute rollercoaster in that regard.

The film tells the story of Stephen Hawking (Redmayne) and his first wife Jane (Jones) whose respective careers and shared family life are tested by Hawking’s early diagnosis with motor neuron disease. Trapped in a failing body, Stephen’s mind strives to explain the universe, its beginning and its end, in addition to the nature of time itself, while Jane’s willpower, endurance and love are pushed to the limit by the demands of their far from ordinary relationship.

Key, of course, to conveying the required emotions is the quality of the performances, the absolute commitment of the actors. As remarkable as Eddie Redmayne’s chameleonic transformation into Stephen Hawking is (and it is), Felicity Jones bares just as much of the dramatic weight as Jane, and there is strong support from Charlie Cox, David Thewlis, Harry Lloyd and Maxine Peake.

As well as looking uncannily like him and distorting his body to the extreme to portray the physicist throughout his adult life, Redmayne effortlessly conveys Hawking’s vast intellect but also isn’t above portraying him as a man with an ego, someone proud and stubborn who would turn down any and all assistance if he were able, even during the worst stages of his physical decline. It’s telling that the one time where he does ask for support he actually says “Jane needs help” rather than “I need help”.

Jones on the other hand fully embraces the script’s provocation of some uncomfortable, but understandable questions about her relationship with Hawking. Jane is shown to be resilient, strong-willed and deeply, unconditionally loving, just the right person for Stephen to be with at the worst time of his life. But as he begins to require more and more dedicated care and attention as time passes, something breaks within her. She put her life, her career and her passions on hold to support Stephen in his, and you have to wonder whether she would still make such a commitment had she known just how long her husband would cling to life.

The scene where Stephen tells his best friend about his terminal illness is one of the most real and honest things I’ve seen in recent years. The natural reaction to such earth-shattering news, as strange as it may sound, is to laugh, first as a reflex, then as a defense against the grave magnitude of the situation. Brian (Harry Lloyd) then goes into denial, insisting Stephen must be mistaken and understandably provoking a hostile reaction from his friend who just wants to be left to despair. In this short sequence, Redmayne and Lloyd manage to portray the entire grieving process from start to finish.

It frequently makes for an upsetting watch as we witness Stephen’s progressive difficulty with the simplest of daily tasks in intimate, painful detail, in addition to the toll caring for him takes on Jane (the film rightly skips over how she coped during pregnancy – it’s really none of our business) but it’s always captivating, oddly hopeful viewing too as Hawking’s body fails and his mind in turn makes impossible leaps.

The film also finds space for a fair few moments of levity – Stephen goes out drinking with his raucous Cambridge buddies even after he loses the power to walk, he continues to embelish his lectures with witty asides even after he loses the power of speech, and at one point he even manages to storm off in a jealous huff in his wheelchair. When he is finally given his now-iconic electronic voice (a spine-tingling moment in itself) Stephen proceeds to test it with quotes from pleasingly disparate sources in what unexpectedly becomes one of the funniest scenes of the year.

There are some lovely recurring visual cues that marry seamlessly with the core themes of the film. Hawking’s early theories were based on the idea of black holes resulting from a singularity, and spirals are used to great effect as Stephen’s mind continually whirs and his personal and physical life spins out of his control, whether he’s staring in a trance at milk stirred into coffee as a student, spinning with Jane on a riverbank, or circling an ornate room in his electric chair during a key moment later in his life. The nature of time itself is also played with in the telling of this story, which might have amused the real Hawking when he saw the film. In a way he is always physically trapped in a moment in time, but in another sense he is much freer, his enlightened mind liberated to roam back to what was and forward to what might be.

A scene midway through the film has Jane trying to explain to new friend and physics sceptic Jonathan (Charlie Cox) her husband’s theories using peas and potatoes. It might have been tempting to resort to such methods every time Stephen dives into hypothesis, to have an everyman character explaining it all in plain English to those talking in the back. Thankfully, the peas and potatoes bit is purely for Jonathan’s benefit rather than the audience’s, and it’s real testament to Hawking’s magnetic personality and gift as a teacher that in all of his lecture scenes, even once his disease has begun to drastically slur his speech, we rarely fail to understand him and his ideas.

There can be a tendency to think of British films as uncinematic, TV movie-like, but The Theory of Everything disproves this often incorrect assumption with beautifully framed shots throughout, striking cinematography and dynamic visuals expressing Hawking’s revolutionary ideas. It’s one of the most handsome films released anywhere this year, and tells Stephen and Jane’s tale with well-judged wit and sensitivity, without falling into the trap of making the story unnecessarily maudlin. Perhaps most compellingly of all, despite Stephen Hawking’s agnostic-to-athiest stance on religion, the film ends up being a rather spiritual experience. SSP