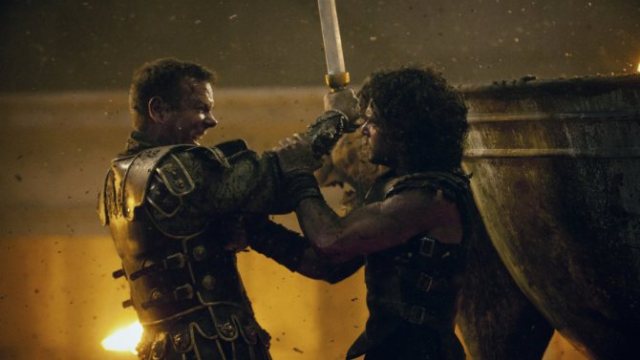 Well, that was disappointing. When it was announced an all-out modern blockbuster was being made based on the devastating eruption of Mount Vesuvius in 79 AD, I thought, what could go wrong? You’ve got inbuilt human pathos, the chance to re-tell an iconic moment of history, and no grander or terrifying spectacle than you could ask for. It turns out that pretty much everything can go wrong.

The film opens in 62 AD, and the brutal massacre of a tribe of Celts at the hands of an invading Roman force. The only survivor, a young boy (Dylan Schombing), is taken by slavers to be used in gladiatorial combat in Londinium. As he grows in body and skill, Milo (Kit Harington) is transported to the teeming Roman resort of Pompeii, where his fight to-the-death is to provide entertainment for the man who murdered his parents in front of his eyes, Senator Corvus (Kiefer Sutherland). As Milo continues to prove himself in the arena, he strikes up a romance with a young noblewoman, Cassia (Emily Browning), just as the mountain that casts a shadow over Pompeii begins to rumble.

POMPEII ends up being a very peculiar brand of bad movie. There have certainly been worse things committed to celluloid, several this year in fact, but many of those were terrible enough to be entertaining, or at least offensive enough in some way to be interesting. Pompeii is just dull and miscalculated to the extreme. The misjudgement of how to play the core premise, as most critics have described it, “TITANIC meets GLADIATOR”, is frankly baffling.

Let us assess the obvious ways the film falls short first. The script is terrible, the acting embarrassing, the characters unbearable and the story manages to outstay its welcome despite taking less than 2 hours to tell. It really shouldn’t be funny to witness a major supporting character suddenly falling into a fissure, but somehow here it is. The romance that should function as the film’s warm, magma-y heart is woefully underdeveloped and might even be less convincing than Anakin and Padme’s from the STAR WARS prequels.

Beyond the obvious, yes the special effects are good, but to misquote Proximo in Gladiator, “they’re not that good”, and boy, does director Paul W S Anderson and his SFX team want you to notice them. Here’s a fun drinking game: take a sip every time you see an elaborate, CGI-heavy establishing shot. Trust me, you’ll be absolutely destroyed, because Anderson, for some reason, feels obliged to use one whenever the scene changes.

The editing is really distracting too, with most cuts lacking rhythm at best, or logic at worst. The cuts jarringly draw attention to themselves, even where it isn’t a requirement to obscure a level of violence that would push the film out of the financially safe age certification. Dialogue scenes are edited like action scenes, and action scenes are edited like the person responsible was relaying instructions over the phone while riding a crowded bus.

I won’t say it’s irredeemable, though. Kit Harington clearly put the work in to get his body into convincing gladiator shape, and much like he does on GAME OF THRONES, he handles the fight sequences well. Kiefer Sutherland turns in one of those performances that’s so bad and inconsistent that it would fit quite comfortably into the “so bad it’s good” category, so there’s a certain pleasure in the amount of camp he provides. Jared Harris, who is otherwise a pointless addition to the cast along with on-screen wife Carrie-Anne Moss, has one of the funniest outbursts in recent memory with “Juno’s tit!”. We also get one genuinely good performance from Adewale Akinnuoye-Agbaje (last seen all spiky as Kurse in THOR: THE DARK WORLD) as Milo’s imposing fellow gladiator Atticus, and he even manages to occasionally bring another dimension to his performance when he’s not lumped with the chore of providing portentous exposition.The secondary baddie, Corvus’ towering Praetorian bodyguard Proculus (Sasha Roiz) is pretty entertaining too, especially when we see that he can somehow take a the same amount of punishment as a Terminator.

Paul W S Anderson should probably just stick to making RESIDENT EVIL movies. He has the remarkable knack of (usually) making that kind of nonsense work. With the somewhat odd exception of EVENT HORIZON, Anderson has demonstrated little to no versatility in the kinds of projects he is able to bring successfully to life. Perhaps in someone else’s hands, Pompeii might have been good, but as it is, it’s an underwhelming, miscalculated, unintentionally hilarious mess. SSP