Posted on October 5, 2014 by Sam Sewell-Peterson 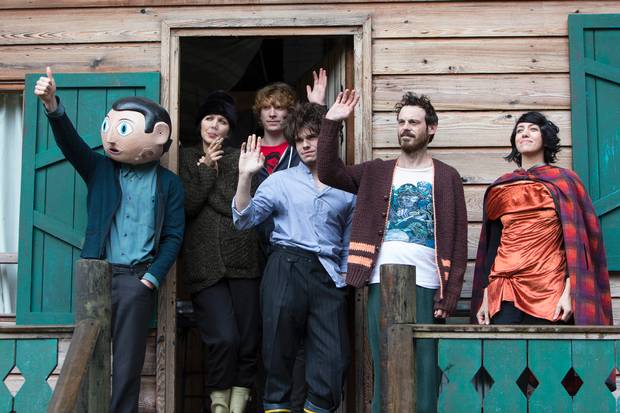 FRANK is not even remotely about Mancunian comic character Frank Sidebottom, it just appropriates his iconography to come up with an original story of its own. This might annoy diehard fans of Chris Sievey and his creation, but I’m sure he’ll get a biopic of his own at some point. Frank is, for the most part, a batty delight. You can never make a real connection with any of its characters, but for a film about alienation and identity crises, this is kind of fitting.

Jon (Domhnall Gleeson) has a dream: to write and perform hit music to a crowd of adoring fans. He holds down a dull office job by day and spends the rest of his time waiting for artistic inspiration to hit, and for his life to pick up. That day comes when avant-garde band the Soronprfbs come to town and quickly to lose their keyboard player to a sudden attempted suicide. Jon is recruited as replacement by Don (Scoot McNairy) mostly for being in the right place at the right time, and the band, led by maverick artist Frank (Michael Fassbender) who is permanently obscured by a massive fake head, retreat to the wilderness of Ireland to record what must surely be a musical masterpiece.

The film starts as something quite gentle, with Jon composing little ditties in his head as he takes in his sleepy coastal neighbourhood, and finding very little inspiration in any of it. The only breakthrough he gets excited about turns out to have be unconsciously plagiarising Madness. Then the Soronprfbs show up and things get weird. Really weird. Frank himself is an unknowable force of nature, a mine of undeniable creativity, though the kinds of ideas he comes up with won’t exactly guarantee the band success overnight. His cohorts, from the seemingly stable Don, every ready with pearls of questionable wisdom to Frank’s girlfriend Clara (Maggie Gyllenhaal) who hates everyone who isn’t Frank (Jon especially) and the pair of mostly silent misery-guts Baraque and Nana (François Civil and Carla Azar), are all an odd bunch to say the least, and not exactly likeable.

Michael Fassbender’s performance is an interesting one. Usually, an actor who spends most of the film with his face covered has to make up for it with extreme physicality (Peter Weller in ROBOCOP) or exaggerate their vocal performance to the extreme (Hugo Weaving in V FOR VENDETTA). Apart from a couple of instances to the contrary, Fassbender doesn’t really do either of these. He just uses a vaguely Americanised version of his own voice (its usual inconsistency of accent an advantage in playing such a bizarre character) and a few flappy hand gestures to get his point across. It’s a surprisingly subtle turn to begin with, which makes it all the more effective when Frank flies off the handle later on.

Fassbender has a great singing voice too, and all the actors (playing the music live and for real) demonstrate obvious musical talent in addition to selling their characters’ personal emotional dilemas in the film’s smaller scenes. The snippets of the band’s music we hear are reminiscent of everything from Sonic Youth (the layered mix of rock and electronic sounds) to The Doors (Fassbender often sounds just like Jim Morrison) to the musical interludes in THE MIGHTY BOOSH (the shear surreal nature of the songs themselves). The music is all good, but you don’t expect to remember much of it after the credits roll, then Fassbender breaks into an honest-to-goodness anthem in the film’s final scene, and I still haven’t managed to shift it from my head a week later.

It’s incredibly refreshing how mundane the final revelation about Frank’s state of being is. Jon posits that something must have happened to him, some tragic and traumatic event, but no, it didn’t. You rarely see this kind of real-world acknowledgement in fiction, that people are the way they are simply because they are.

There’s no getting past the fact that some of the jokes don’t quite gel, and as soon as we leave the band’s recording phase, it loses something. The characters work best as idealistic underdog artistes, and the very notion that they might seriously break it big is just too unbelievable, even in a story as out-there as this. Thankfully, from a skittish, fairly bitty third act, the conclusion to the film is pretty glorious and satisfying, packing an emotional wallop and giving all these weird and wonderful characters a decent sendoff.

Niggles aside, Frank makes for a rewarding and entertainingly zany watch, determinedly brushing aside convention and refusing to be pigeonholed. Like the titular character, Lenny Abrahamson’s film is mesmerising, compelling and elusive, saying as much about the contradictions of the music industry as it does about art, genius and madness. Highly recommended. SSP