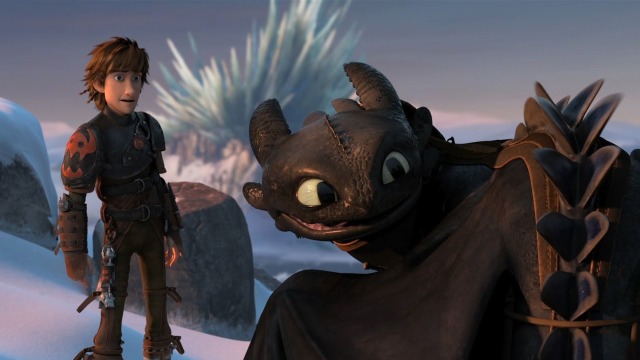 HOW TO TRAIN YOUR DRAGON 2 comes agonisingly close to bettering its predecessor. It’s not quite the pitch-perfect intimate adventure the first film was, but there’s still humanity here (not to mention dragonity) as this world of Vikings and flying reptiles is expanded upon in satisfying ways, and spectacle piled on in bucket-loads.

Five years after he met Toothless and united the village of Berk and dragonkind, Hiccup (Jay Baruchel) has turned full-time explorer, flying with his scaly kindred spirit to chart the numerous islands of the archipelago around his home and discovering new species of dragon, all the while denying his place as the next leader of his tribe after his father Stoick (Gerard Butler). His expedition leads him to reconnect with his long-lost mother Valka (Cate Blanchett)  and make the horrifying discovery of an army of dragon slavers lead by the formidable and quite mad tyrant Drago Bludvist (Djimon Hounsou) whose desire for dominance over all threatens Berk’s hard-earned peace.

In terms of the emotional journey you’re taken on, rarely has a cinematic story taken you from joy to despair and back again so fluidly. The first act is a zippy romp ending in the revelation that Hiccup’s mother is alive, well, and very like him. Then this safe, stable bubble of happiness is obliterated and we have to question everything that has come before. By the end, equilibrium is restored, though we suspect this world will never be the same again. This range of human feeling is communicated exquisitely by a cast (notably Baruchel and Blanchett) who prove that you can indeed do subtlety in voice-only performances.

The film is full of unique, original and beautiful imagery. It’s staggering how far the quality of animation has come in four years – hair, scales, elemental effects have never looked this good created in a virtual environment. There’s just so much that I’ve never seen before. Yes, there’s references to everything from SUPERMAN (Valka’s Fortress of Solitude-esque ice lair) to STAR WARS (Hiccup’s lightsaber-y flaming retractable sword) and GODZILLA (a moment with Toothless in the finale that I won’t spoil) but the vast majority of what we see is pleasingly new. I’ve never seen a giant aquatic dragon burst from the depths and expel a shower of fish to feed his fellows as they circle around him. I’ve never seen a figure dancing across the backs of a flock (if that’s the right collective) of dragons in flight. I’ve never seen a male animated character (a hunk voiced by Kit Harington) objectified to great comic effect.

One of the most entertaining ideas the film has, in fact it’s a stroke of genius, is presenting pretty much every character’s dialogue scene in deep focus so we can still see what the dragons are doing in the background, and we consequently never lose track of the personalities of the characters who can only communicate through body language. It might be Hiccup and his girlfriend Astrid (America Ferrera) talking about their relationship, but we can still see Toothless and Stormfly playing behind them. Hiccup might be having a tender moment with his mother Valka, but we can still see a display of dominance between Toothless and Cloudjumper behind them.

The action is ambitious and creative, optimised by elegant, sweeping cinematography. From the amusing and light-hearted opening dragon race, to Hiccup’s emotion-fuelled first flight through the clouds alongside his mother as they catch up on lost time, to the full-on LORD OF THE RINGS-scale battle in the final act, all tastes are catered for.

John Powell’s music is as gorgeous as it was last time, and there is even a song-and-dance musical number as a key character moment. His celtic-folk-tinged score underlines and emphasises the most important emotional beats, and ties the whole thing together wonderfully.

It’s a film full of thematic subtleties. They really missed a trick in not calling it How to Earn Your Dragon, because that’s what the film’s ultimately about, the difference between the two. Hiccup is a born leader, though he doesn’t know it yet, and his destiny has been tied to that of the dragons far longer than he could have imagined. Director Dean DeBlois has a real thing for missing limbs as symbolism, as key moments that make the characters who they are, and to create telling parallels between them.

All the returning characters have moved on, as well as physically aging (almost unheard of in animation) they are challenged and progress on fascinating lines. While we might not have equivalent heart-melting moments to the first film, the hurt the film does make you feel is a different kind of hurt, an adult realisation that we can befriend and treat wild animals well, but in the end they are still wild animals who could revert to instinct at any moment.

The main antagonist Drago is admittedly a little flat. Despite the best efforts of an almost unrecognisable Djimon Hounsou and a terrifying shout he vocalises to control his dragons, you feel like there might have been more to his character in an earlier draft of the script. It makes sense to make the bad guys are dragon dominators to contrast them with the citizens of Berk who have just learned to live in harmony with them, but they’re not particularly interesting. Even after a late in the film reveal that should really be a bigger moment, Drago still just feels like a cut-and-paste late-90s Disney villain. There’s a point when Hiccup asks incredulously what Drago’s end-game is – “to rule the world?” and the answer is basically yes.

Luckily, the main threat of the film comes not from one madman and his army, but from the emotional turmoil of depriving the citizens of Berk of their rewarding relationship with their dragons.  It’s telling that Hiccup’s big inspiring speech is not about the citizens of Berk saving their own lives, but about the importance of fighting back because “Drago is coming for our dragons”. The real enemy in the film is subjugation and hatred, not Drago himself. It’s a big idea to build a family animated fantasy-adventure sequel around, not to mention the commentary on mankind’s fragile balancing act with nature. Thankfully, all this heavy stuff is counter-weighted by glittering visuals, winning vocal performances and the development of characters who, though animated, you care deeply about like they’re flesh and blood. SSP