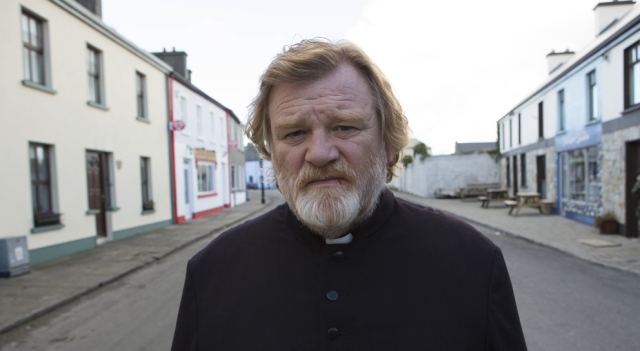 Being the ignorant atheist I am, I had no idea what the word Calvary meant.  In fact, when John Michael McDonagh’s follow-up to THE GUARD was first announced, I thought it was called Cavalry. Calvary is actually the name given to the site of Christ’s crucifixion, and the film CALVARY covers similar, and related thematic ground.

The film opens with Father James Lavelle (Brendan Gleeson) in confession, where a parishioner describes in vivid detail the abuse he has suffered at the hands of Catholic priests from an early age. Father James is shocked and disgusted at what he hears, and is unable to provide answers, and the parishioner makes a vow to kill him in a week’s time. Over his final few days, Father James meets his colourful flock, listens to their grievances and endures mockery, rudeness and outright aggression at their hands. As James tries to find peace within himself before he meets his maker, his depressed daughter (Kelly Reilly) comes to visit after a failed suicide attempt, and dredges up their troubled family past.

The meat of the film is challenging, to say the least, and a lot of it can be hard to watch. It’s not often visually explicit, but sickening details emerge in dialogue and conjure gruesome images in the mind. Pretty much everything perceived to be wrong with contemporary Ireland is in there somewhere, but mostly it focuses on the horrific abuses of trust committed by Catholic priests that have dominated the press over the past few years. Calvary is not a Catholic apologist film, and is very much of the view that the atrocities took place, and should never be forgotten (or allowed to happen again) but they should also not provoke a shared guilt of those members of the clergy who have done nothing wrong.

The film’s greatest strength comes from its thematic undercurrents, subtext and the social commentary they allow for. Father James, as a priest, represents the church. He is a good man, an innocent man, but is blamed for the crimes of his fellows. Symbolically, he stands in for the Catholic Church in general, which has been viciously attacked by victims of abuse, and blamed for the monstrous actions of a few individuals by the wider public. Early on, despite being completely and utterly guiltless, he decides to take his punishment on the church’s behalf, becoming a martyr for the sins of all Christians, and symbolically becoming Christlike in the process.

Brendan Gleeson, like he did with The Guard, proves he should be front-and-centre of a film more often. He’s great as a distinctive supporting actor, and that is where he’s made his name, but here your focus never leaves him, your resolve is shaken when his is, your faith is brought into question as his is, your heart breaks as his does. The way the story is filmed also leaves Gleeson with nowhere to hide – more often than not he is filmed in stationary closeup to take in the smallest of nuances, notably in the striking opening scene which never leaves the confession booth. Father James’ parish is inhabited by a range of recognisable archetypes, all of whom could have a reason to want revenge against their priest. The archetypes that appear in the film are smartly commented on by Aidan Gillen’s Frank, proclaiming that as a pragmatic surgeon he’s “one part humanism, two parts gallows humour” before he probes Father James over what role he sees himself playing. Various professions, classes and backgrounds are represented in Father James’ parish, all of whom are united (more or less) by one thing – their faith in the church has been shaken.

It’s mostly doom and gloom, but there are flashes of levity, all in McDonagh’s distinctive dry, slightly sardonic style. He once again comes up with a great prejudice-based joke, though unlike The Guard’s brilliant “I’m Irish – racism is part of my culture”, the humour comes from Chris O’Dowd’s butcher Jack actively trying not to be offensive, but showing his ignorance in hilarious fashion in the process. You also get Dylan Moran acting up in his usual inebriated man-child fashion (but in expensive suits), and get to find out just what an Irish police inspector (Gary Lydon) gets up to after dark.

A particular performance highlight is O’Dowd, who previously I wasn’t entirely convinced of his potential as a movie star (beyond comedy) but he’s given ample opportunity to demonstrate his great range here. Reilly  again proves how well she plays troubled individuals, and it’s refreshing to see a female character who’s gone through mental and emotional turmoil who isn’t instantly reduced to a wilting flower (she mostly tells anyone offering patronising pity to f*** off). Her scenes with Gleeson are tender, but with a slight undercurrent of bitterness, making for a convincing father-daughter relationship. Dylan Moran also shows he can do more than “Irish alcoholic grouch”, giving his country toff Michael a real, deeply-rooted vulnerability. Aidan Gillen just plays Little Finger in scrubs, but I’ve got no complaints about that because he’s hilarious. An unexpected treat later in the film comes from Brendan Gleeson sharing a scene with his real-life son Domhnall, playing an imprisoned cannibal murderer in a particularly atmospheric and disturbing dialogue sequence in a dimly-lit cell.

Though Calvary is initially set up as a Whodunnit, in the end it doesn’t really matter who will turn up to kill Father James. The film is constructed in such a way that pretty much any of the characters we meet could have been victims of the church’s abuse in the past and be seeking retribution. You might guess the eventual culprit, but what really matters is that scars of the past still weigh down heavily on the present. Everyone in Father James’ parish seems to have it in for the church for one reason or another, just as many in contemporary Ireland and around the world have had their faith shaken by the atrocities committed by priests that have come to light in recent years.

Calvary isn’t anywhere near as fun as John Michael McDonagh’s previous directorial effort, The Guard, but neither should it be. It’s a very serious film in contrast to the black comic Irish-western that also starred a flawless Brendan Gleeson in the lead, and it shows that McDonagh and his muse can be very versatile in their sly deconstructions of rural Ireland. It discusses a controversial subject that is still painfully raw in the minds of many, but rather than damning the Catholic Church for all eternity, it asks you to practice that very Christian of virtues: forgiveness. Father James allows himself to become a scapegoat for the wrongs of his brothers, and though he has a clear conscience, he accepts his fate willingly to give his killer some form of satisfaction. It’s a canny and beautiful spiritual journey that pays dues to the past but firmly commits to moving forward, and moving on. SSP