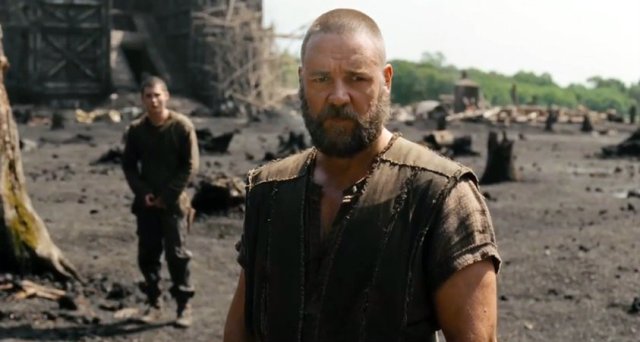 A modern take on arguably the most famous story in the Old Testament, we follow Noah (Russell Crowe) as he makes extensive preparations and uncompromising sacrifices after receiving a vision from the Creator of the imminent cleansing of the world of mankind’s sins in a great flood. As the last in the line of Seth, Noah and his family live in harmony with the world around them, and build a great Ark to save two of every animal for a new beginning. In contrast, the descendants of Cain and their savage ruler Tubal-cain (Ray Winstone) drain the world of vitality, wastefully mining its resources and slaughtering man and beast alike to increase their strength. As the world’s protectors and destroyers inevitably come into conflict, the almighty deluge begins…

Personally, I don’t understand the controversy, but then again, I’m not the least bit religious. The film has miracles, divine intervention, it’s got moralising and Biblical quotation. What’s there for Christians to disapprove of? If it’s just that this isn’t the wipe-clean Sunday School vision of Noah’s Ark, then that seems more than a little petty.

The film has a clunky beginning, with an annoying and unnecessary Bible lesson to bring the audience up to speed. Surely you can give the audience credit to work out for themselves which characters have descended from sinners and which haven’t (hint: it’s the ones with the pointy sticks and bad teeth). Besides, you get Noah recounting the story of Genesis to calm his frightened family later in the film (repeating much of this exposition in the process). Thankfully, the film gets a lot better. There’s a long buildup, but once the spectacular flood finally hits, then you get the unusual but compelling combination of the emotional human drama of a disaster movie and the intense theological debate of a particularly thought-provoking religious studies seminar. As Noah becomes more zealous, and his decisions more monstrous, his family’s unconditional love for, and faith in him rapidly erodes, leaving only resentment, hatred and fear. The  further the story plunges into high melodrama, the better the film becomes.

The casting is pretty good across the board. No-one else manages to look as simultaneously remorseful and angry as Mr. Historical Epic Russell Crowe, and he sells the physical and moral weight of Noah’s mission, and leaves it pretty open to whether Noah just loses it later on as he makes more and more questionable decisions, or whether he was always a madman obsessed with his unflinching religious belief. It’s good to see Jennifer Connelly back with Aronofsky again, and playing Noah’s wife Naameh, she is quietly dignified for most of the runtime, before giving one of the great emotional outbursts in the film’s final act. Emma Watson and Logan Lerman continue to grow in ability and range as Noah’s daughter-in-law and middle son respectively. Who else would but Anthony Hopkins would have the gravitas and screen presence to play the oldest and wisest man in the Old Testament, Methuselah? Hopkins even manages to inject a little mischievous humour into proceedings with his performance. Ray Winstone doesn’t have to try particularly hard, growling and shouting his most abrasive Cockney through a massive beard, but in a sense it doesn’t matter when he’s only a secondary antagonist to the hostile weather.

Aronofsky is noted for his obsession with the look of his films, and with playing with his audience’s perceptions. There’s classic Aronofsky fever dream hallucinations in Noah, particularly striking being a creation sequence presented as the most vivid and sumptuous high-speed photo montage. It really wouldn’t look out of place playing in a gallery with other arty stills hanging on the wall around it. Despite Aronofsky’s visual drive, the CGI behind a lot of the animals is a bit…off. It doesn’t help that most of them have been tweaked to look a little less evolved, and I’ve no idea why there’s a dog with armadillo scales running around at the beginning, I mean, what in the name of all that’s holy was that? Again, you don’t really mind the effects that don’t quite work when the aesthetic is so striking and memorable elsewhere, notably the rapid-fire creation scene, the great flood itself and the haunting image of the remnants of humanity clinging desperately to a shard of rock in the tempest, all the while Noah refuses to save them and risk the ruination of the world’s new beginning.

It is admittedly pretty hard to keep a straight face at how seriously some of the film is played, particularly when a pair of doves carrying olive branches turn up. It’s admirable that Aronofsky and his cast resist sideways glances at the viewer, that they’re completely committed to telling the story they’re telling as a heady, sombre and imposing fantasy epic. And a fantasy epic it well and truly is, because the characters dress like apocalypse survivors from another dimension, and the technology level of early man veers wildly throughout the film. Whenever you can’t really justify stuff like this, you might as well point to divine intervention, or just good old fashioned magic.

Stories in the Bible have always been ripe for adaptation into spectacular cinematic fare. We haven’t had a Biblical epic trend in Hollywood for a long time, perhaps due to some people’s discomfort with explicit religious imagery turning up in their entertainment. With Noah, and a valiant attempt to balance blockbuster spectacle with more arthouse, intellectual fare, we could very well see more Bible stories making an appearance in multiplexes over the next few years. As the first film that might start such a trend, it doesn’t deliver on all levels, but it certainly gives you plenty of talking points. Like all of Darren Aronofsky’s films it’s stunning to look at, thematically layered, and narratively speaking, more than a little weird. I can’t say I agreed with every stylistic decision made in the film, and not everything is executed as well as it could have been, but there’s certainly much to debate, and a lot to savor on repeat viewings. SSP