Review: The Hobbit: The Desolation of Smaug (2013)

Posted on December 18, 2013 by Sam Sewell-Peterson 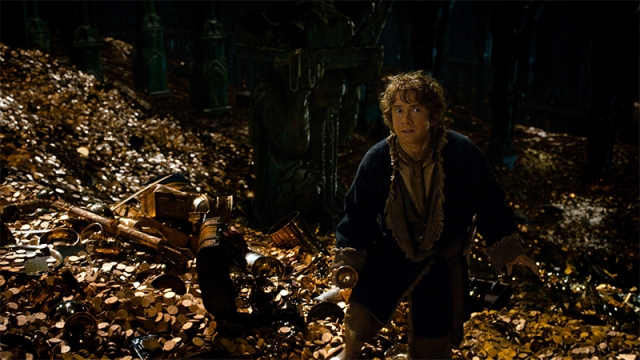 I haven’t had more delirious fun with a film this year than I did with THE HOBBIT: THE DESOLATION OF SMAUG. The first film, for all its merits, was a bit of a slog at times, but the same can’t be said for part 2. It’s a pacey, engrossing and often thrilling fantasy blockbuster, and much more fitting as a prequel to THE LORD OF THE RINGS in the shared themes and neat plot links.

Bilbo Baggins (Martin Freeman), Gandalf the Grey (Ian McKellen) and the company of Thorin Oakenshield (Richard Armitage) are pressing forward with their quest to reclaim their homeland and treasure from the clutches of the fearsome dragon Smaug (Benedict Cumberbatch). The middle chapter of Bilbo’s adventure sees him tangle with horrible giant spiders, insular and corrupt men and elves, and of course the scheming fire drake of the title. Besides “Riddles in the Dark” in part 1, and the Battle of Five Armies that has been set up for film 3, everything interesting about Tolkien’s tale happens here.

Peter Jackson is free to let his imagination run wild with a horror-tinged hallucinogenic trip through Mirkwood, a really nasty brawl with a nest of giant spiders, magic battles with Gandalf and the demonstration of every way imaginable for our heroes to deprive snarling orcs of their extremities. The sheer inventiveness and variety of the action set-pieces really does show how weak and repetitive the equivalent scenes in the first film were.

The motivations of every character are made abundantly clear – we know exactly what is driving these pleasingly multi-faceted heroes, villains and in-betweens. Freeman and Armitage rise to the challenge of selling to the audience that their characters both being corrupted in some manner, and Lee Pace is mesmerising as the serpentine elf king Thranduil, the first elf we’ve seen with an agenda. Luke Evans makes for a proud and conflicted Bard and Cumberbatch, with that voice and presence was born to play the dragon, which is stunningly realised with his performance-captured physicality. But the real scene-stealer of the film is Evangeline Lilly’s Tauriel. The “she-elf” is far more than just the token girl in a film of hairy men, and gives the boys a run for their money on the action front in addition to being a really interesting character (refreshingly, held back by her class rather than her sex) in her own right.

It’s nice to see elves as flawed, human characters for once – not the perfect, goody-two-shoes that they usually appear to be. The wood elves of this film are just as prone to corruption as men, and have become paranoid, isolationist and cruel in their solitude from the world within their cursed forest. The inter-species romance set up between Tauriel and a certain member of Thorin’s company is a sweet idea, and also far more compelling than Arwen and Aragorn in Rings (which lost traction pretty quickly) and refreshingly, the implications of a love triangle offers intriguing possibilities rather than instantly summoning bile.

The action is on another level to AN UNEXPECTED JOURNEY – endlessly creative and energetic, and the multi-layered and hilarious “barrel escape” sequence is a serious contender for being the action scene of the year. The hefty Bombur may not yet have had a audible line of dialogue, but he gets the biggest laugh of the film all to himself. The extended chase scene involving Smaug at the end perhaps lasts a little too long, but it does give Jackson an opportunity to see some more of the abandoned dwarf kingdom of Erebor as a very angry dragon smashes through it.

Yes, Laketown looks a bit too much like Ankh-Morpork from Terry Pratchett’s Discworld books rather than something that looks right in Middle-Earth, and occasionally you can’t help but see a CGI sheen (usually when we transition from practical to elaborate digital effect, or when we have to watch Orlando Bloom and his CG-facelift for an extended time). Minor niggles aside though, The Desolation of Smaug is a triumph that comes very close to the quality of Peter Jackson’s revered original Tolkien trilogy from a decade ago.

Any doubts about the over-embellishment of a short children’s book raised in the first film have been well-and-truly quashed by the sheer delight of what is on show here. It’s certainly the most fun film Jackson has made since he hit the big-time, and at 2 hours 40, quite breezy by his standards. I’m really hopeful for the grand finale THERE AND BACK AGAIN in a year’s time. It has potential to be something great if Jackson gets the balance just right again. SSP

I'm not paid to write about film - I do it because I love it. Favourite filmmakers include Bong Joon-ho, Danny Boyle, the Coen Brothers, Nicolas Winding Refn, Clio Barnard, Steven Spielberg, Guillermo del Toro, Paul Verhoeven, Taika Waititi and Edgar Wright. All reviews and articles are original works written and owned by me. They represent one man's opinion, and I'm more than happy to engage in civilised debate if you disagree.
View all posts by Sam Sewell-Peterson →
This entry was posted in Film, Film Review and tagged Fantasy, Film, Ian McKellen, Martin Freeman, Movies, Peter Jackson, The Hobbit: An Unexpected Journey, The Hobbit: The Desolation of Smaug, The Hobbit: There and Back Again, The Lord of the Rings, Tolkien. Bookmark the permalink.

1 Response to Review: The Hobbit: The Desolation of Smaug (2013)