Posted on October 7, 2013 by Sam Sewell-Peterson 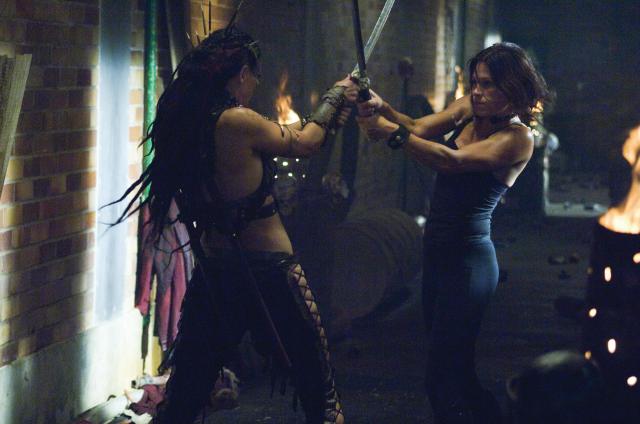 DOOMSDAY is by far the weakest link in British writer-director Neil Marshall’s career so far. Following a pair of highly original horror films DOG SOLDIERS and THE DESCENT, Marshall endeavoured to continue his run of success, and sadly as soon as he brought sci-fi and action elements into the mix, he seems to have stumbled.

Following the outbreak of a deadly virus, Scotland is quarantined from the rest of Britain and survivors left for dead, until a specialist military team venture across the boarder decades later in search of a miracle cure, and soon find themselves fighting for their lives. A promising enough premise, you might think, but you’d be wrong.

The script is bad, even by trashy apocalypse film standards, featuring such classic dialogue as David O’Hara’s “This is a GPS tracker, it’ll tell us exactly where you are” – that one line repeated the same piece of information three times! The editing in the action scenes choppy and confusing, too, and the acting sub-par, even from veterans Bob Hoskins and Malcolm McDowell, who are both running on autopilot and seem to have just turned up for the paycheque. Rhona Mitra just about gets by on her physicality, and David O’Hara does a very good impression of David O’Hara. I’m not asking for high-calibre performances across the board, but you’ve at least got to make your characters memorable, and I’m really struggling to remember a single character’s name, let alone their motivations.

Doomsday as a whole is far too derivative. The first half of the film is a cross between 28 DAYS LATER and RESIDENT EVIL, but with cannibalistic Glaswegians instead of zombies. The film then becomes an ultraviolent version of the BBC’s ROBIN HOOD as the protagonists are imprisoned in a Scottish castle, before becoming MAD MAX for the final set-piece (though to be fair to Marshall, he does at least acknowledge the heavy influence of the latter).

I will say that Marshall’s trademark love of gory death is still present and correct (Sean Pertwee’s fate is particularly nasty), when his budget allows for real carnage he delivers, and a smile is raised now and again when his more surreal ideas rear their head, such as when the terrifying leader of the cannibal tribe (Craig Conway) takes to the stage before his legion of bloodthirsty followers dancing the can-can.

You can’t really tell whether there was meant to be a deeper message behind the film, either, or if it was always intended to be just a trashy B-movie. I guess you can see the ever-popular moral “the government are bastards”, and maybe a half-hearted comment on the Scottish independence issue (there’s a really big wall separating it from the rest of the UK), but it either needs to be more explicit, or interwoven into the plot, or more central to the characters’ motivations to make any sort of impact. As the film is, it just looks like Marshall toyed with including social commentary and bottled out halfway through.

From a run-of-the-mill filmmaker, as a bit of dumb fun, Doomsday might be more acceptable, but from Neil Marshall, who hasn’t put a foot wrong before or since (CENTURION and his GAME OF THRONES episode are definitely worth a look) it’s a real disappointment. Here’s hoping his next big-screen undertaking, the US remake of TROLL HUNTER, is more rewarding. SSP