Series Retrospective: The Before Trilogy

Back to my semi (OK, I’ll be honest lately it’s been less) regular feature where I look back on a long-running film series and see how well each instalment has or hasn’t age. This time it’s Richard Linklater’s beloved naturalistic will-they-won’t-they sightseeing excursion, the BEFORE…Trilogy. 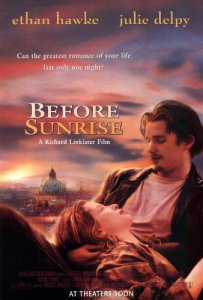 BEFORE SUNRISE (1995) The premise – a chance encounter on a train convinces two travellers to spend an evening wandering, and talking, around Vienna – might not sound like the most riveting prospect. But Richard Linklater often sees unlikely potential and convinces you pretty quickly, in no small part thanks to leads Ethan Hawke and Julie Delpy making it the most compelling, relateable and swooning romance possible. It’s about life, the universe and everything in the most everyday way. The more-or-less continuous stream of  dialogue covers the mundane and the profound and everything in-between, but always coming back to how they both see their places in the world. Key passages of talk are the train scene for what matters on the surface and the pinball game in a bar later for what matters a little deeper. If you wanted to slap a message on this one, it’s that anything is possible; the film ends on an uncertain but hopeful note for Jesse and Celine, and a promise that we hope will be fulfilled.

BEFORE SUNSET (2004) The best part of a decade later, they meet again, but was it fate, a fluke, or careful planning? For Linklater’s first sequel, he starts to get a bit meta, with Jesse being asked on the audience’s behalf, “Do you think they got back together after six months?” The question is answered, and it’s not a fairy tale ending. In real life, life itself just gets in the way… This one’s about the missed opportunity, and the emotional content is heightened immeasurably by Jesse and Celine both finding themselves in a less emotionally secure place, however the rest of their lives seems to be “sorted”. Key conversations here are the cafe scene for hope and laughter and the car journey for implosion and despair. You can see why they fell for each other, but you can also see which of their traits would drive the other mad. The realness doesn’t dilute the heady romance of it all, and it ends on one hell of a cliffhanger. But at least we knew we’d be seeing them both again this time. 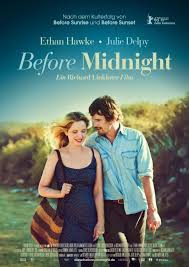 BEFORE MIDNIGHT (2013) So they finally got together for real, so there’s no need for another chance meeting. Instead of reconnecting with each other after a time apart, Jesse and Celine instead get to poetically reconnect with their younger selves. They comment on how rarely they get to walk, talk and not worry now they have children, how time has become all the more precious now they’ve hit 40. Another decade on and Hawke and Delpy do occasionally glimmer with the energy of their previous selves, at times it’s like the clock has been turned back to the spontaneity of the train to Vienna, before responsibility. Isn’t it shameful that in all three films everyone has to speak English because of Ethan Hawke? You’d have thought he (Jesse, not Ethan) would have made an effort by now. I’m also sure the music didn’t used to be this noticeable or intrusive, a rare point where the reality wobbles a bit. What brings you crashing back to the real is that this third chapter isn’t afraid to show the strain of maintaining a long relationship, and we’re under no illusions that this could be the end of their happily ever after.

The Before… Trilogy hasn’t aged a day, especially, weirdly, the first one. Characters we love to spend time with don’t really age, or at least we’re prepared to ignore their flaws out of sheer affection. Will we see Jesse and Celine again? I wouldn’t be at all surprised, but if we’re following the established pattern, we’ll have to wait until 2022. SSP