Time once again to look back on a long-running franchise in its entirety. There’s a lot of NIGHTMARE ON ELM STREET movies. Not quite as many as its slasher fellows HALLOWEEN and FRIDAY THE 13TH, but Freddy sure did refuse to stay dead, even when they promised he would. Here’s some thoughts on them all, dire remake aside. Happy Halloween. All together now! “One, two, Freddy’s coming for you…”

A NIGHTMARE ON ELM STREET (1984) The epitome of Wes Craven’s genius as a horror filmmaker. We still don’t know all that much about dreams; what they are, what they mean. They do hold a power over us and the introduction of demonic murderer Freddy Krueger (Robert Englund at his most twisted and terrifying) who makes you hope you’ll never sleep again makes the very most of this. Original imagery, creeping dread and some of the most memorable movie deaths of all time helps make this Craven’s opus and the film that built New Line.

A NIGHTMARE ON ELM STREET 2: FREDDY’S REVENGE (1985) A lot of people put this one down, even picking it as the worst of the series. I think that’s really unfair. True, it’s not in the same league as Craven’s iconic original, but what is? It adds some sharp elements the mythology, boosts Freddy’s power set, and more importantly, is still still tense and scary. Who cares if it’s a bit (OK more than a bit) trashy and exploitative? That’s the slasher genre!

A NIGHTMARE ON ELM STREET 3: DREAM WARRIORS (1987) Let’s be frank here: it’s just rubbish X-MEN isn’t it? There is so much potential in the concept of a team of kids fighting back against Freddy in their dreams, but that promise is largely squandered here. The budget isn’t good enough to execute the concept of the dreamers using powers (as originally scripted) with enough pizazz and a film, a superhero-asylum-horror, it really should be scarier and more thrilling. 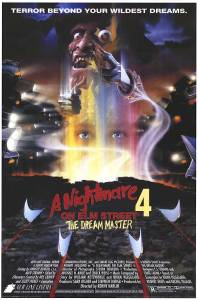 A NIGHTMARE ON ELM STREET 4: THE DREAM MASTER (1988) Dull, dull, dull. We’re given a wet and uninteresting new protagonist in Alice (Lisa Wilcox) and the film has no style to speak of and very few scares. At this point the wider plot of the series was clearly just being made up as they went on and the mythology becomes stodgy and incomprehensible. About the only thing to recommend in Dream Master is a single image of how Freddy is killed this time round. Apparently he eats souls now, so they are induced to revolt against their host in an effect that hasn’t aged well, but is still striking.

A NIGHTMARE ON ELM STREET 5: THE DREAM CHILD (1989) A good dollop of the Gothic, a pretty clever premise, the trippiest of the series’ imagery and a killer pulp comic set piece makes this one memorable. It’s also very obviously rushed, cheap-looking (with decent enough cinematography) and terribly acted, even by the standard of adults pretending to be teens. I still don’t know why the nun needed to be released from her mortal shell and how she beats Freddy. If I’m honest I’d forgotten we’d seen her before in an earlier film. 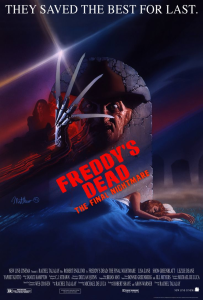 FREDDY’S DEAD: THE FINAL NIGHTMARE (1991) Opening on a Nietzsche quote followed by a Freddy Krueger quote: good gag. If this was made now, and/or more time had passed between instalments, this could be considered an early example of Hollywood’s favourite way to revitalise a named property: the soft reboot. By this point there’s nothing scary about Freddy; he’s just a gurning goon messing with a new generation of dumb kids who don’t know the rules yet. It only gets worse when the 3-D gimmick comes in (it’s always been gimmicky, always will be) and they try to rationalise Freddy, one of the all-time great evil-just-because villains. 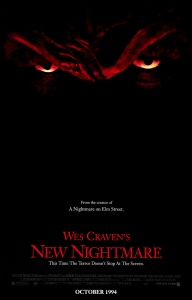 NEW NIGHTMARE (1994) New Nightmare is a whole other thing. The return of Wes Craven to a franchise he grew to despise (when he wasn’t doing it) and the start of the horror maestro’s meta phase, for me this is the best Nightmare since the first. Heather Langenkamp, still remembered for playing Nancy in the original Nightmare, is having terrible dreams and comes to realise Freddy is breaking into the real world and haunting her and her son. It’s pretty self-aggrandising stuff, suggesting that Craven was keeping a real evil in check by making movies, but it’s clever and scary and the effects and nasty imagery mostly hold up today. SSP