Posted on August 2, 2016 by Sam Sewell-Peterson

It’s that time again: time for me to admit to some classic films I hadn’t until very recently seen, and how they have impacted me on my first watch. This time I thought I’d catch up on two that have been proclaimed masterpieces, and both, interestingly enough, discuss at length what war does to a man. 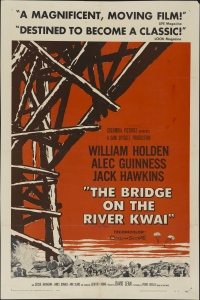 The Bridge on the River Kwai (1957): Columbia Pictures

THE BRIDGE ON THE RIVER KWAI (1957) David Lean doesn’t half love his morally grey protagonists. From Peter O’Toole’s egotistical charm monster in LAWRENCE OF ARABIA to Alec Guinness’ obsessive, broken pillar of the British class system here, none of his heroes are knights in shining armour in the traditional sense. They don’t even tend to be that likeable, but they’re certainly interesting.

Guinness as Colonel Nicholson sells his harrowing physical and mental ordeal completely and utterly and clearly relishes showing how a proud and mannered man slowly but surely unravels. His mastery of screen comedy lends itself well to Nicholson’s witty retorts to the grimmest of situations, much to the frustration of Sessue Hayakawa’s increasingly riled Colonel Saito. Speaking of ordeals, Lean’s efforts to get this made the way he wanted on location and as real as it could be (there really wasn’t any other way to do it) is an epic tale of endurance in itself.

The broad strokes of this story are true, but the film still functions as a bit of a wish fulfillment fantasy for unassailable British values, a stiff upper lip and unshakable resolve seeing us through thick and thin. Yes, the glorification of the British Empire is a little uncomfortable today, and it is annoying that they parachute in a Hollywood star like they did with THE GREAT ESCAPE in order to sell the thing across the pond (especially when he escapes the Japanese and recuperates in a convenient and friendly tribal village) but William Holden’s character serves a purpose, and it’s a decent performance. This isn’t quite Lawrence, but it’s an emotional ride. 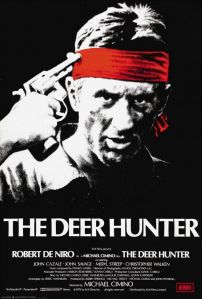 THE DEER HUNTER (1978) Earlier this year we lost Michael Cimino and though I was certainly aware of him, to my horror I realised I’d never actually watched any of his movies. I thought I’d start with the one everyone talks about. Cimino certainly likes to take his time. Strictly speaking, you don’t need to see an entire Russian Orthodox wedding ceremony or the entire wedding celebration afterwards. But strictly speaking, without taking the time for this you wouldn’t be as invested in these characters, this involved in their story when things turn very South in the second half of the film.

Robert De Niro and Christopher Walken rightly get recognition for their portrayal of two small-town Pennsylvania steelworkers-turned-soldiers being affected by Vietnam very differently. The vacant horror etched on the face of a Green Beret the boys want to worship sums it up wonderfully simply, but little can we guess the level of atrocity and character deformation to come. I think the most common reading of it must be a story of friendship torn apart, but I think there is definitely enough in the subtext to argue it’s a literal unrequited love story between De Niro and Walken’s characters, and that’s heartbreaking.

Cimino’s encouragement of naturalistic performances and dialogue, the immaculate (both immaculately beautiful and immaculately horrific) look of the film courtesy of Vilmos Zsigmond (another sad loss in 2016) and the swelling score by Stanley Myers all help to make this a film that lasts. It’s far more than a series of infamous Russian Roulette scenes. Controversial on release, and problematic when discussed today in terms of representation of the Vietnamese, it’s still for me an undeniably affecting war epic.

Most pleased I’ve now seen: The Deer Hunter (because it’s a real thrill when a critical darling lives up to expectations and you can understand why it still hits so many so hard, outdated representations or no). SSP