Time of the Timelord

Posted on November 23, 2013 by Sam Sewell-Peterson 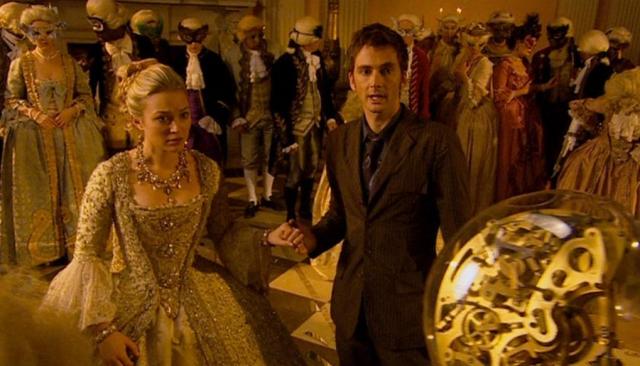 I know this is a film blog, but I couldn’t resist marking this occasion. Today’s the day (as if you’d managed to miss it), the 50th anniversary of the debut of DOCTOR WHO.

I haven’t always been a diehard fan of the show as many of the people watching THE DAY OF THE DOCTOR tonight will be. This isn’t because I’ve been converted to the show over time, but because I did most of my growing up in the “wilderness years” that the show was off air after following cancellation in 1989. Since the show’s comeback in 2005, I’ve been captivated, and in the lead-up to the big day I’ve been familiarising myself with as much of the show’s original run as possible. Today, I consider myself a true Whovian.

I’m not going to write a lot to mark the occasion, but I’d like to share the stories I love, the stories I hate, and which Doctor was best.

It’s Tom Baker being Tom Bakery within a pretty intricately plotted whodunit featuring very cool robots. What’s not to like? The designs are impressive and hold up incredibly well considering how much time has passed, and the script is one of the best the show has seen.

An extremely radical story idea – what if The Doctor has amnesia, becomes human, and was powerless to stop an invasion? It’s a very clever story full of subtleties (which drip-feed into the impressive series finale THE SOUND OF DRUMS/LAST OF THE TIME LORDS), and demonstrates what The Doctor is capable of in a state of blinding rage when he finally gets his memory back and takes his revenge on the sinister “Family”.

I’m amazed it took the show so long to explicitly explore The Doctor’s relationship with his beloved TARDIS. When she is given physical form, it turns out that the love is mutual, and an extremely unconventional and moving love story was born in the staggeringly talented mind of Neil Gaiman, and brought to life by tender performances from Matt Smith’s Eleventh Doctor and Suranne Jones’ Idris/TARDIS.

The highlight of the Doctor Who revival, and still the scariest story Steven Moffat has done (I don’t care what people say, this is 10x more chilling than BLINK). Christopher Eccleston and Billie Piper are on fine form, as is John Barrowman as the now iconic bisexual con-man Captain Jack Harkness. This Blitz-set horror story is tense, dark and creepy, but has lighter moments and ends on a pleasingly optimistic note.

My favourite of all Doctor Who stories is an unassuming one-off period piece written by Moffat where The Doctor (Tennant) meets Madame de Pompadour (Sophia Myles) and outsmarts clockwork robots with a hidden agenda. The story is creative, the performances flawless, and the ending is soul-crushing. I really struggle to hold back the tears whenever I rewatch it. It proves the emotional potential of a series about time travel, and explores all of its heartbreaking implications.

Matt Smith’s first series as The Doctor is pretty consistent in quality, but this story falls a bit flat. It’s just a really lazy “let’s drop a monster into a recognisable historical setting” story, and doesn’t offer much to recommend at all.

This two-part William Hartnell story was just filler after the Dalek debut, and the episodes consequently look cheap and are really dull. It all takes place in the TARDIS with the cast acting a bit weird, and it looks like it’s going somewhere interesting until…it doesn’t.

Russell T Davies is a great writer/producer, but he always seemed to struggle with Christmas Specials, and they all tended to be somehow overblown and underwhelming at the same time. This story had a potentially interesting concept: a ordinary man in Victorian England (David Morrissey) thinks he’s The Doctor and fights the Cybermen, but the potential is wasted (as is Morrissey) and the script isn’t up to much.

Another really bad Davies-era Christmas Special is set on Space Titanic and guest-stars Kylie Minogue. It makes zero sense, the baddies (robot angels who throw their halos as weapons) are rubbish, and Kylie makes absolutely no impression – she’s not bad, just bland.

DALEKS IN MANHATTAN/EVOLUTION OF THE DALEKS (2007)

This story gives me chills, and for all the wrong reasons. It’s a real contender for being the worst Doctor Who story since its revival, and is certainly the one that makes me spit the most venom. I’m not a fan of many Dalek stories, but this is a shonky effort even by the standard of the over-used fascist dustbins. It’s full of sloppy writing, awful acting and pig creatures (a strange Davies obsession). I really wish this one could be conveniently lost by the BBC like so many earlier stories.

Patrick Troughton’s Second Doctor is a wonderful creation. A hodge-podge of contradictions and complexities. He played the fool and the coward, but had a shrewd intelligence and unshakable bravery about him. He was always the smartest person in the room, but didn’t like to boast about it like many of his subsequent incarnations. Many have tried to copy him, but none have bettered him.

Every Whovian has unshakable loyalty and attachment to one Doctor, the Doctor who was around in your formative years. As I’ve said, I was born in the 1990s so didn’t have a Doctor as such, but there was one for me in my early teens when the show returned. Christopher Eccleston’s Ninth was great, but not around for anywhere near long enough. David Tennant, on the other hand, as the Tenth Doctor, made just the right impression on me. He was excitable and energetic, endlessly optimistic and forgiving until you crossed him, then you’d feel his wrath.

Over half a century, Doctor Who has evolved from an affectionately remembered British cultural artefact to a worldwide sci-fi phenomenon. It’s been a great 50 years, and long may The Doctor’s journeys through time and space continue.

Now, if you’ll excuse me, I have a very important date to keep with Messrs Smith, Tennant and Hurt. SSP

Writer and film fanatic fond of black comedies, sci-fi, animation and films about dysfunctional families.
View all posts by Sam Sewell-Peterson →
This entry was posted in Television and tagged Billie Piper, Christopher Eccleston, Daleks in Manhattan, David Morrissey, David Tennant, Doctor Who, Evolution of the Daleks, Human Nature, John Barrowman, John Hurt, Kylie Minogue, Last of the Time Lords, Matt Smith, Neil Gaiman, Patrick Troughton, Russel T Davies, Sci-fi, Sophia Myles, Steven Moffat, Suranne Jones, Television, The Day of the Doctor, The Doctor Dances, The Doctor's Wife, The Edge of Destruction, The Empty Child, The Family of Blood, The Girl in the Fireplace, The Next Doctor, The Robots of Death, The Sound of Drums, The Vampires of Venice, Tom Baker, Voyage of the Damned, William Hartnell. Bookmark the permalink.

1 Response to Time of the Timelord