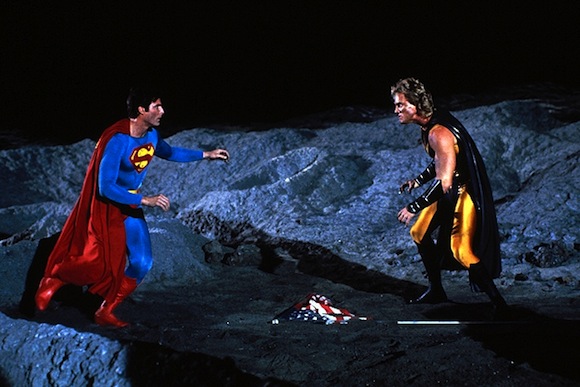 I have a confession to make…I like SUPERMAN IV: THE QUEST FOR PEACE. It’s nowhere near on par with the first two Christopher Reeve movies, but it’s considerably better than SUPERMAN III, and is unfairly seen as the absolute dud of the series.

Sure, it looks cheap, and the script (co-written by Reeve) is flat and clumsily addresses big issues of the day, namely nuclear disarmament and morally bereft news conglomerates. But as a Superman film, it’s actually not bad – the characters act like they should, the main themes are still there, and it’s pretty entertaining throughout.

I also love the (admittedly ropey) but enjoyably over-the-top and incredibly creative fight between Supes and Nuclear Man (Mark Pillow) which has them scrap from Metropolis to the Moon.

It’s all absolutely ridiculous of course, but that’s what a Superman film should be! If any hero has the right to leave reality and common sense behind, to casually throw nuclear missiles into the Sun, plug active volcanos and rebuild the Great Wall of China with his eyes surely it’s the Man of Steel?

I’m not saying it’s an intelligent film, not even a little bit. It tries to tackle the biggest world issues of the late 80s and comes across as over-simplistic and heavy-handed. Almost everything defies basic logic, but if you’re prepared to shut down your brain for a bit you can get a lot of enjoyment out of it. What I am saying is that it’s a very fun, very dumb superhero film.

I understand why people have their issues with it. The budget was slashed drastically, so nothing looks convincing and lots of the effects shots are recycled multiple times throughout the film. Christopher Reeve, as talented a performer as he is, did not prove himself as a particularly competent screenwriter, and the whole thing is about as subtle as Nuclear Man’s glittery outfit. But at least it’s not the tonally jarring, vapid, lazy vehicle for Richard Pryor to be unfunny that Superman III was.

I enjoy Superman IV: The Quest for Peace as what it is – a bit of mindless fun. It’s not well executed technically, or well acted, or well scripted, but it keeps you watching, smiling (often bemusedly) and shows the potential for how far you can push a film about a man who can do pretty much anything.

It’s also an undemanding 90 mins, and Superman actually makes an effort to save people, which is more than can be said for this year’s MAN OF STEEL. Yeah, that’s the stinger I’ll leave on – below its wobbly exterior, Superman IV is a better Superman film than Man of Steel. SSP

I'm not paid to write about film - I do it because I love it. Favourite filmmakers include Bong Joon-ho, Danny Boyle, the Coen Brothers, Nicolas Winding Refn, Clio Barnard, Steven Spielberg, Guillermo del Toro, Paul Verhoeven, Taika Waititi and Edgar Wright. All reviews and articles are original works written and owned by me. They represent one man's opinion, and I'm more than happy to engage in civilised debate if you disagree.
View all posts by Sam Sewell-Peterson →
This entry was posted in Film, Film Feature and tagged Christopher Reeve, Film, Gene Hackman, Movies, Sidney J. Furie, Superhero, Superman IV: The Quest for Peace. Bookmark the permalink.

1 Response to Film Confessional #2: Superman IV: The Quest for Peace