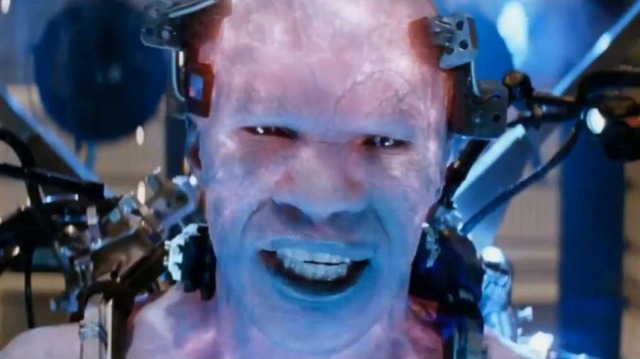 I honestly can’t remember a time I was less excited about an upcoming year in filmmaking. But 2014 is currently one of those years for me. I could of course be surprised by what I see, but at the moment next year is just a big ugly obstacle denying me access to STAR WARS EPISODE VII, THE AVENGERS: AGE OF ULTRON and BOND 24. About the only films I’m excited to see next year are HOW TO TRAIN YOUR DRAGON 2, which could easily underwhelm like some of Dreamworks’ other animated sequels, and Darren Aronofsky’s NOAH, which has a terrifying potential to go very, very, wrong. What follows is a hugely pessimistic list of the ten films I dread the most next year, and why…

ROBOCOP
It’s ROBOCOP, but diluted and drained of all interest. Without the fearless satirist Paul Verhoeven at the helm, and a bland new mechanised suit inhabited by THE KILLING’s Joel Kinnaman. Beyond the wobbly stop-motion effects, the original RoboCop doesn’t need remaking – it’s as hard-hitting and visually striking as it ever was. This “reimagining” is pointless. It’s going to be tame. It’s going to waste the talents of the character actors involved (Michael Keaton, Gary Oldman, Jackie Earle Haley) just as the TOTAL RECALL remake did. It just won’t be very good.

CAPTAIN AMERICA: THE WINTER SOLDIER
I reckon that Cap needs a pretty spectacular second solo outing to justify his existence. He’s fine when he’s hanging around with all his cooler Avengers mates, but as a central character he can be a bit dull. I wasn’t a massive fan of the first Captain America – it was fine as a WWII satire, just not a particularly inspiring example of the superhero genre. They still haven’t got a modern take on Cap’s costume right, either, and the early images of the new one don’t look too promising. There’s certainly something interesting to get out of the whole “soldier out of his time” concept, so let’s hope it’s not squandered.

THE AMAZING SPIDER-MAN 2
Now this one looks like a car-crash waiting to happen. Last year’s reboot was…OK. Andrew Garfield and Emma Stone have chemistry, and the web-slinging looks better than it ever has. But Rhys Ifans’ Lizard didn’t work, and they left so many loose plot threads specifically to set up this sequel that it was really quite irritating. Early word doesn’t look good – director Mark Webb and co have crammed in so many new characters (heroes and villains) that they had to ditch introducing Mary Jane Watson (who would have been played by Shailene Woodley) until the next film. At the moment, it looks like an overblown and over-complicated disaster.

X-MEN: DAYS OF FUTURE PAST
Another one that’s going to be a nigh-on-impossible balancing act to pull of is X-MEN: DAYS OF FUTURE PAST. Based on the time-jumping, convoluted run in the comics, it boasts a ridiculously huge ensemble cast of pretty much every mutant who’s been in the films (and several played by multiple actors in different time periods). While I’m excited to see young and old Professor X and Magneto share the screen, I really don’t know how returning X-director Bryan Singer is going to do justice to each character, or make the story comprehensible. It’s an intriguing, but terrifying prospect.

22 JUMP STREET
Simply enough, it won’t be as fresh or funny as the first one. Lightning very rarely strikes twice, especially where comedy films are concerned. I hope it will be ok, and that it doesn’t become a bloated and increasingly desperate money-maker like THE HANGOVER series has become.

TRANSFORMERS 4
Stop it Michael Bay! Just stop it! How much bigger, brasher and more explodey can you go? Also, Mark Wahlberg and especially Kelsey Grammer deserve to be in far better, more interesting films.

SIN CITY: A DAME TO KILL FOR
I doubt Mr Rodriguez will be able to top his living graphic novel masterpiece. MACHETE got a bit tiresome after a while. Plus, it’s been in development hell for ever, and such films tend to stagnate and passion for such projects often escapes. Looking forward to Mickey Rourke and Bruce Willis (somehow) returning, though.

MINIONS
Following DESPICABLE ME 2, I am so bored of Minions. They were cute the first time round, but began to grate in their second outing. I really doubt they can hold together a film on their own, but of course kids will love to spend more time with the little yellow gibberish-spouters.

So that’s what I expect from 2014. I could of course be wrong – there might be a surprise or two hidden amongst next year’s releases, but I’m not holding out much hope. Bring on 2015! SSP

I'm not paid to write about film - I do it because I love it. Favourite filmmakers include Bong Joon-ho, Danny Boyle, the Coen Brothers, Nicolas Winding Refn, Clio Barnard, Steven Spielberg, Guillermo del Toro, Paul Verhoeven, Taika Waititi and Edgar Wright. All reviews and articles are original works written and owned by me. They represent one man's opinion, and I'm more than happy to engage in civilised debate if you disagree.
View all posts by Sam Sewell-Peterson →
This entry was posted in Film, Film Feature and tagged 22 Jump Street, Captain America 2, Fifty Shades of Grey, Film, Minions, Movies, RoboCop, SIn City: A Dame to Kill For, The Amazing Spider-Man 2, The Expendables 3, Transformers 4, X-Men: Days of Future Past. Bookmark the permalink.